Oh look! It's the Yankees. Just when you thought an over-priced, self-important team had faded away, they come right back. Woo. Hoo.

Well, it's not like you can say they don't deserve to be there. The Yankees have played their butts off. It's helps that their new stadium apparently has the same measurements as the Little League field I played on when I was 10, but they have played hard.

No, what's frustrating is that the Sox, again, lost a game they had every opportunity to win. But once again, one bad inning did them in. Daisuke gave up three runs in the third, turning a 1-0 Boston lead into a 3-1 deficit. And when Bay homered to get Boston within one, Delcarmen put the Sox in a bad position and then Masterson comes on and immediately beans in the insurance run. And just like that the Sox are sharing first.

The lineup didn't help, either. Outside of Ellsbury and Bay, no one did a hell of a lot. Oh, Ortiz dropped his average to .193 with another 0-fer. I almost forgot to mention that. Come June 1, this team needs to make a decision on Ortiz. Either bench him or DL him and get someone with a bat in there already! Guess what, Theo? Sub-.200 batters hurt your team in the sixth spot as well. I can tolerate Kottaras every now and again because he's not an everyday player and is on a learning curve to boot. But this Ortiz thing has to be resolved.

Really, what is there to say? The Sox should be 3-0 on this trip, but thanks to some silent bats and two really bad innings, they're 1-2 and the Yankees are in second only because of the fact that they can't beat us this year. As usual, it's going to be a Boston/New York slugfest to the finish.

But, even accounting for all the glumness above, I still think the Sox will prevail. They simply have more depth than the Yankees. And when the injury bugs hit some more in the dog days of summer, Boston is better poised to be able to fill the holes than the Yankees are. That's simply the truth.

Right now, though, it's as close as it has been all year atop the AL East. And while I'm none too thrilled about it, I figure I can try to be mature about the whole thing. And in that vein, I want to show you all a picture of CC Sabathia with Miley Cyrus. 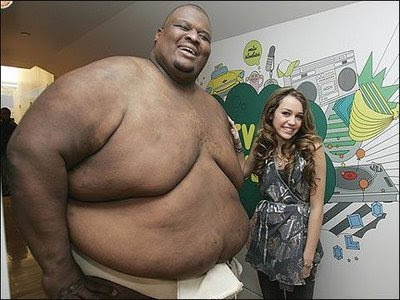 There. I feel much better now.

As for tonight's game, it's the improving Josh Beckett against the completely unknown Anthony Swarzak. Another of those seeming mismatches that tend to bite the Sox on the butt when they happen on the road. Beckett is 4-2 right now and he should be 5-2 if not for the no-decision against the Mets. Another performance like that and he'll get his fifth win.

get your facts straight. the dimentions of the new yankee stadium are exactly the same as they were in the old stadium. and, if there was a pro stadium with little league dimentions, its fenway, with both foul poles at just over 300 feet...c'mon!!!

Oh lighten up, Francis. I was referring to the fact that home runs are up at Yankee Stadium. Or did you actually believe that I was claiming that Yankee Stadium is the size of a little league field?

Seriously, is sarcasm dead on the web or are people just too stupid to understand it?

Great stuff. I enjoy reading your blog. Would you mind adding me to your blog roll? Here's the link: http://www.adiehardyankeesfan.blogspot.com

I'll have you linked to mine. Thanks in advance.

Same here, I added you to my blogroll at ww2.4sportboston.com.

You've both been added to the Roll. Welcome! And thanks for the return link!