Not in my wildest dreams did I believe the Mets would be going into today's game with a chance for a Fenway sweep. Somehow I don't think Omir Santos' name will bother Bostonians as much as Bucky "bleeping" Dent or Aaron "bleeping" Boone, but that loss has to be frustrating.


Until Santos' line drive skimmed the top of the Green Monster, Red Sox pitching had dominated the inferior Met lineup. Beckett and Papelbum (from my paper's infamous back page) even made red-hot David Wright seem overmatched all night.

Not once throughout the night as Beckett kept rolling did I think the Mets were winning this game. Yet, Mike Pelfrey, after a shaky first inning, pitched his best game of the season, and, as I intimated, kept the ball in the park. Huge job by Pelfrey! I was amazed to be down just 2-1 heading into the top of the ninth. 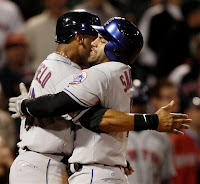 Emotions of the top of the ninth: Gary Sheffield -- and he didn't need BALCO to do this -- showed his professionalism by working the walk to lead off the inning. Then Papelbum mows down Wright and Jeremy Reed. If anyone believes Jeremy Reed belongs in the Met lineup, let alone batting 6th, they're crazy. As Santos stepped to the plate, I mentioned to a colleague that I had a lot more faith in Santos than Reed. My faith was rewarded on the first pitch. What a line shot. At first I thought It was just going to hit the upper third of the Monster, but boy did it carry.

Good job all around by the umpires. On the field, it had to be difficult to determine it was a home run. Thankfully MLB has replay for such home run disputes. And, they rightfully changed the call to a home run and a 3-2 Met lead. I have no problem with Terry Francona going out to discuss it. He said after the game he pretty much knew it was a home run, but he had to go out anyway.

It brought me back to Monday night when Ryan Church missed third base on his way to scoring the go-ahead run in extra innings. His Marvelous Marv Throneberry-like play drew ire from manager Jerry Manuel, but only at him. I wish Manuel, even though third base coach Razor Shines assured him Church missed the bag, had gone out to argue. How do you not argue your player being called out for missing third base. You almost have to argue it on principle for the rarity of it. Just give a few minutes of debate like Francona did on Santos' HR last night.

I must say the best Met win of the season thus far was tempered by revelations that closer K-Rod missed the game with severe back spasms. Thankfully, I learned a short time ago, he's back with the team and feeling much better. If not for that, this K-Rod mention would be higher in the blog post.

Yet, J.J. Putz was a bit scary last night in getting the save last night. He threw harder than he had all season, but his pitches were flat were flat and the Sox pounced on them. And the Met defense saved -- I can't believe I'm saying this -- Putz as much as he earned the save. Incredible infield defense all around. All four infielders -- Daniel Murphy, Luis Castillo, Ramon Martinez (cough) and David Wright -- contributed beautifully in the ninth to preserve the win.

If the Sox have anything going for them today, it is that the Mets just seem to lack a killer instinct of closing out big series sweeps. If the Sox were up 2-0 right now, I'd be more inclined to think they'd sweep. But a Met fan can believe, can't he?
Posted by Ian Powers at 1:00 PM