A Bad Day All Around 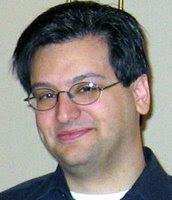 Tuesday started poorly and just got worse from there.

The Yankees played their worst game since before the All-Star break in a 6-2 loss to the Rays in Tampa, revealed Alfredo Aceves has a tired arm and learned Chien-Ming Wang need surgery and likely won't be able to pitch until late next year.

Talk about a trifecta of bad news.

About the only thing that went right was that the Red Sox blew a lead in the ninth and lost to the A's 9-8 to remain 2-1/2 games back of the Yankees in the AL East. Otherwise it was a day to forget.

Wang's news is not surprising -- visits to Dr. James Andrews in Birmingham, Ala., rarely result in good news -- but it was nonetheless disappointing. The Yankees entered the year counting on Wang to give them a solid 1-2-3 combination at the top of the rotation with CC Sabathia and A.J. Burnett. The Yankees believed they had the foundation for a strong rotation for years to come.

Instead, Wang struggled from the start, clearly not fully recovered from his Lisfranc injury from the year before. He rehabbed and came back before going back on the DL with a shoulder strain. Is it possible the shoulder injury is the result of compensating for the foot injury? Very possible.

But the loss of Wang means the Yankees are almost assuredly going to try to acquire another pitcher, likely a starter -- though not Roy Halladay. Jarrod Washburn and Bronson Arroyo have been mention as targets and the Westchester Journal News' Peter Abraham suggested Jon Garland on his blog. All would work, but GM Brian Cashman is pretty good at working steathly, so don't be surprised if he comes up with a deal for someone no has even considered.

Meanwhile, Aceves revealed he has a tired arm. He said he's not feeling pain or discomfort, just tired. If that is accurate, it's not terrible news. Aceves has emerged as a valuable and versatile member of the bullpen, but the Yankees can give him a week so that he can regain his strength. But any time a pitcher says anything is wrong with his arm, no matter how minor, there is cause for concern. Time will tell how serious this is.

And then there was the game. With a chance to stick the defending AL Champion Rays in the coffin, the Yankees allowed them to remain on life support.

It was a miserable game, filled with errors and poor defense, ineffective hitting, bad baserunning and a poor starting performance by Sabathia. Heck the Yankees even let a six-inning pitcher in Scott Kazmir pitch into the eighth. 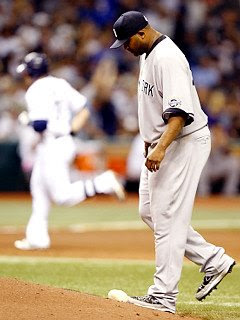 Sabathia (10-7, 3.83) was hurt by errors by Alex Rodriguez and Derek Jeter, misplays in right by Nick Swisher and his own failure to cover first on an infield hit, but he also struggled with his fastball command again and couldn't put away hitters when he got to 0-and-2 and 1-and-2 on them.

The Yankees are 11-11 are in Sabathia's starts and the big lefthander, who was the Yankees' big offseason free-agent prize, knows that isn't cutting it.

“It is annoying. No matter whether I get the win or not, you want to go out and try to help the team any way you can and it’s pretty frustrating that I’ve been
going out there and not helping us,” he said.

The Rays grabbed a 1-0 lead in the second when Dioner Navarro's sacrifice fly to center brought in Ben Zobrist after a single and two walks loaded the bases. They pushed across two more in the third when B.J. Upton singled to lead off and scoring on Carl Crawford's triple. Even Longoria brought in Crawford when A-Rod made a bad throw to first.

The Yankees, meanwhile, couldn't get to Scott Kazmir, who benefited from several nice defensive plays, but was efficient and effective.

Kazmir allowed one run on five hits and one walk in 7+ innings. He threw 72 of 113 pitches for strikes.

The only serious trouble he faced came in the fourth when Mark Teixeira led off with a double and scored on Hideki Matsui's one-out single to make it 3-1. However, Matsui was thrown out on the play after making too wide of a turn around first.

Sabathia, meanwhile, just couldn't settle down. In his recent starts he's been able to limit any damage and give the Yankees a chance to win. Tuesday he couldn't do that.

In the fifth inning, Longoria hit a two-out homer to make a 4-1. Sabathia the came apart in the sixth. 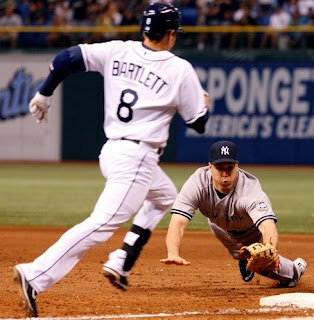 With one out, Gabe Kapler doubled and went to third on a ground out. Jason Bartlett then hit a routine grounder to first, but Sabathia failed to cover and Bartlett beat Teixeira to the bag for hit and RBI. Upton then crushed a double to bring in Bartlett to make it 6-1 and Sabathia's day was done.

Sabathia allowed six runs -- five earned -- on nine hits and two walked in 5-2/3 innings. He struck out six and threw 69 of 109 pitches for strikes.

Mark Melancon, getting into a game for the first time since the All-Star break, was the long bright spot, escaped the jam in the sixth and allowing just one hit over the next two innings. He struck out two.

The Yankees scored a meaningless run in the ninth when A-Rod singled with two outs, went to second in defensive indifference and scored on Matsui's double.

It was a day the Yankees need to forget about quickly.

Joba has been on fire coming out of the break and the Yankees need him to come up big again. This is a big game. A win by the Yankees would put the Rays 7-1/2 games back in the East and deal a blow to their playoff homes. A Yankees loss could get the Rays back in the race.