It's Deja Vu ... Only Different We've seen this story before. The script seem oh so familiar. But unlike years past, there is doubt about the ending.

The Yankees would struggle through April, maybe even through May and into June, but sure enough they would kick into high gear, surge through the second half and into the playoffs.

It was a given. It always seemed to happen and we became confident that it always would.

Until last season, when finally it didn't.

We thought the Yankees learned their lesson. They haven't.

CC Sabathia pitched eight solid innings, but was outdueled by Justin Verlander and the Yankees lost to the Tigers 4-2 Monday in Detroit, their fourth straight loss to drop them to 9-10.

And so with three games left in the month, it appears the Yankees will finish the first month no better than 2 games over .500 and possibly four games under. It is far too early to panic, but that confidence that things are guaranteed to turn around is shaken after missing the playoffs last season.

I can't help but suspect that in a different era, when The Boss still ruled the South Bronx with a big stick and a booming voice, Joe Girardi would find himself on a very hot seat. He may still if they Yankees don't start playing a better brand of baseball.

Monday the Yankees needed Sabathia to be the horse who carried the Brewers and Indians to the playoffs in each of the last two seasons. He was certainly much, much better than in his first three starts, but still not a dominant force, the ace, the guy who would pull them out of their slide. 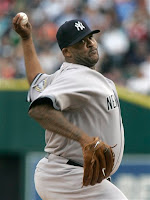 On many nights, Sabathia's outing would have been good enough to win, but not against a sharp Verlander and not with an offense that continues to struggle to score runs. Sabathia allowed four runs on six hits with out a walk. His control was sharp and he struck out nine while throwing 99 pitches, 70 for strikes. It was a step forward.

Sabathia was able to give the beleaguered bullpen a much needed night off. And that in and of itself was important with Phil Hughes set to make his season debut Tuesday. But without any support from the bats, Sabathia couldn't give the Yankees what they needed most: a win.

The offense continues to plod along, struggling to push across runners when they get into scoring position. Monday it was 1-for-9 and stranded seven. Some of the credit for the Yankees' struggles has to go to the pitchers, but the Yankees can't use that as an excuse.

This slump is going to come to an end at some point and I still believe the Yankees will get on a hot streak and return to playoffs -- a belief bolstered by the Rays' bad start. The problem is that once the Yankees get there, they will constantly be facing this kind of top-notch pitching. If they can't figure out how to score against the likes of Verlander, Lackey, Lester and Papelbon, it will be another short postseason trip.

When Girardi was hired, he promised a return to the small-ball ways of the championship Yankees. We have yet to see that in his 1+ years. It's about time he starts delivering on that promise.

What We Learned
In years past, the Yanks have gone to the minors to infuse some youth and enthusiasm into the team. Chien-Ming Wang and Robinson Cano came up to shake up the team in '05. In 2006, it was Melky Cabrera. Of course in 2007, Joba Chamberlain, Ian Kennedy and Shelley Duncan helped spark that second half surge. The Yankees already have called up Mark Melancon and Hughes is getting what might be his make-or-break shot this season.

But as the offense continues to struggle, there were be calls to end the Cabrera-Brett Gardner center field experiment and call up Austin Jackson. He's hitting .340 in the early going at Triple A Scranton, but this will be a test of discipline for the front office. Jackson may not be ready for the majors yet and as tempting as it might be to call him up, the Yankees can't afford to set back his development.

It's a tough spot for Hughes, but if he ever could snap this losing streak, it would go a long way to restoring the fans' confidence in him and justifying the Yankees' faith in him. Fortunately for the Yankees, Jackson is only 2-4 with a 5.72 ERA in 13 games against them.

Chuck, thanks. Really appreciate it. Spread the word and keep commenting on what we write. We love that.