Curtis Granderson got his Yankees career off to a good start on Sunday with a home run in his first at-bat.

It didn't take him much longer to secure a big spot in the rivalry and win the hearts of Yankees fans everywhere.


Granderson led off the 10th inning against Jonathan Papelbon on Wednesday with a home run to lead the Yankees to 3-1 victory against the Red Sox at Fenway Park in Boston, giving the Yankees the 2-1 series victory.

Brian Cashman and Joe Girardi believed they were getting a special player when they made the trade for Granderson in the offseason. Granderson is 29, has hit 30 homers in a season while playing at Comerica (National) Park in Detroit, has speed and plays a very good center field. By all accounts, he's a good guy in the clubhouse and is great with the media.

Really, the only question with Granderson is how he'll do against lefthanders, against whom he entered the season with a .210 career batting average.

And while it is foolish to draw any conclusions off three games, it certainly appears that Granderson is not about to overwhelmed by the bright lights or this rivalry.

"Just trying to help the team out," Granderson told the Journal News. "That's all I want to do is just be another small piece of this puzzle. Trying to go ahead and help get this team back to continue to win ballgames. Happy to get a chance to be a part of that."


With the score tied at 1 entering the 10th, Granderson stepped to the plate against Papelbon, who was entering his second inning of work, and ripped an 0-and-1, 94 mph fastball into the stands in right.

It didn't get much better for Papelbon from there. After striking out Nick Swisher, Papelbon walked Brett Gardner, who then stole second. Derek Jeter walked before Scott Atchison came on and walked Nick Johnson to load the bases. Mark Teixeira rolled a soft grounder to short to bring in Gardner and make it 3-1.

Now look, three games into the season it would be foolish to draw any sweeping conclusions about whether Papelbon is being affected by his blown save in last season's ALDS. It would be stupid to even make that suggestion. 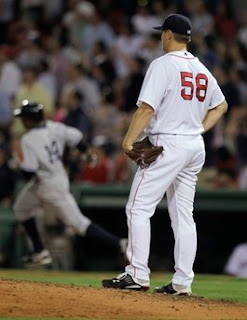 But what is fair is to question whether Terry Francona should be pitching Papelbon for more than one inning -- especially in the third game of the season. Dave has questioned that tactic in the past because we have seen numerous times that when a closer conditioned to pitch one inning at a time goes back out for a second inning of work, he loses some of his effectiveness.

Heck, at this point in the season, Joe Girardi wouldn't dream of pitching Mariano Rivera for more than one inning.

Whatever Francona's reasoning, it worked out for the Yankees and I can't complain about that. It allowed Rivera to come out and record save No. 2 of the season with relative ease.

It was great ending to what was a terrific pitchers' duel between Andy Pettitte and John Lackey.

Pettitte, who threw about 8 innings in spring training games because of weather, was surprisingly strong, allowing one run on on six hits and three walks in six innings. He struck out four and threw 54 of 94 pitches for strikes. The Sox scored that run in the third on a David Ortiz single to right.

Lackey, however, was better. Another newcomer to the rivalry, Lackey pitched six shutout innings, allowing three hits and two walks. He struck out three, but despite those impressive numbers, still had to work hard, throwing 58 of 100 pitches for strikes.

The Yankees, though, broke through against the Red Sox bullpen in the seventh as Jorge Posada hit a one-out double against Scott Schoeneweis and Nick Swisher grounded a two-out single to right that Posada scored on only because the throw from J.D. Drew was up the third-base line a bit and bounced past Sox catcher Victor Martinez.

Then Girardi decided to gamble. With the score tied, Girardi called on, ugh, Chan Ho Park ... and got lucky. Park pitched three scoreless innings, allowing one hit and striking out one, but anyone watching knows Park wasn't that good. Seven of the outs Park recorded were on fly balls, four or five of which were hit loudly enough to raise a collective, "No! No! No! ... Phew!" from Yankees Universe.

I wrote it two days ago and I'll write it again: Park doesn't belong in pinstripes.

The Yankees just happened to get lucky with him on the mound this time.