With Alex Rodriguez's fate all but sealed, the New York Yankees can get back to the business of preparing for the 2014 season.

And despite their massive, ill-conceived, pre-Christmas spending spree, the Yankees still have a ton of work to do.

The Yankees are pursuing Japanese phenom Mashiro Tanaka to bolster the rotation. The bullpen needs a veteran presence to support likely closer David Robertson. Third base is a huge question mark with A-Rod's suspension. And the outfield remains overload, despite releasing Vernon Wells on Thursday. 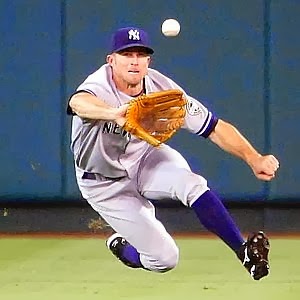 But let's focus on the outfield.

Simply put, the Yankees have too many assets in the outfield and too many glaring needs elsewhere.

Moves have to be made.

Teams have been checking out Ichiro, but the reality the former All-Star and future Hall of Famer just isn't going bring much back in return. A serviceable reliever might be the best-case scenario.

But the Yankees have another chip they can and should move.

The Yankees should trade Gardner.

Look, I like Gardner. I'd love for him to be a career Yankees. He's a Gold Glove-caliber outfield, a capable hitter who works pitchers and gets on base, and a dangerous baserunner who makes the Yankees' offense much more dynamic.

And he's entering his walk year with what likely will be a team-friendly salary in the range of $5 million. His trade value will never be higher. 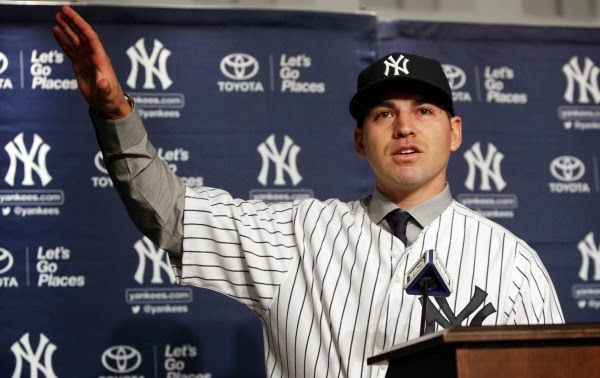 That makes Gardner valuable on the trade market. The Reds, Tigers and Phillies reportedly are among a half-dozen teams that have expressed in the Yankees' outfielder. And with that amount of interest in Gardner, Cashman could leverage a deal that would bring back something quality in return, either in the form of an established major leaguer or a prospect who is a year away from the majors.

This isn't an easy decision for Cashman. They Yankees are better with Gardner this year, but a general manager also has to keep an eye on the future.

And if Gardner is not in the Yankees' plans for the future, Cashman needs to make a move that will bring back something more significant for the future than a draft pick.
Posted by Unknown at 7:10 AM

Only the Yanks would sign someone who is basically a replica of the outfielder they already have...except he costs over 4x as much.

And be careful about trading Gardner...Ellsbury is always one step away from missing half the season.

If they Yanks are planning on letting Gardner walk after the season anyway, that doesn't really solve the issue of Ellsbury's injuries in the long term. Perhaps by trading Gardner, they can bring back a young outfielder who can provide that insurance. Or perhaps Zoilo Almonte, who looked pretty good last year in limited time with the Yankees, can serve in the backup role as well. Either way, Ellsbury's health is an issue the Yankees can't avoid.

Ah wait a minute here. Both posts talk about Injuries. Ellsbury has two injuries both because he hit a wall and hit another player. Stop with this injury prone player. Jeter missed a season (almost) due to a shoulder separation from diving in the stands He is praised (I love Jete) but Ellsbury is vilified STOP!
If like Tex Ellsbury has a bunch of injuries then complain but right now heres a guy who lead the Red Sox to a World Series. Lets be positive.

I would answer that by saying that other players hit other players and/or run into walls and do not go down for over half the season each time. I'm not saying he isn't a good player - he is. I have loved watching him come up through the Boston system. But he is vulnerable to injuries. That's not a dig on him - just the truth.

Prior to last season, the most significant time that Jeter has missed was in 2003, when he was on the DL for six weeks after dislocating his shoulder with a catcher on a steal attempt of third on Opening Day (he played still played 119 games that year), and in 2011 when he was out for a month with a calf injury. In 2004, when he made the dive into the stands, he played 154 games.

Ellsbury plays hard. He is a terrific player. But his body had gotten beaten up, and you have to be concerned about that.