The Number 6 went out of circulation since 2000, when Gary Gaetti wore it. It was retired in 2008, and rightly so, for a man who may have made the Hall if World War Two had taken three prime years away from him.

5. Vic Wertz (1959-61) - Vic Wertz is best known for "The Catch", the famous play by Willie Mays in the 1954 World Series. Wertz hit the deep fly in Game One that Mays caught on a dead run over his shoulder. Long after that, Wertz came to Boston via a trade with the Cleveland Indians in December of 1958. The Sox sent Jimmy Piersall to Cleveland for Wertz and center-fielder Gary Geiger. He played first base all three years, splitting time each season with one or two other players. But in 1960 he was the primary first baseman and turned in his best season in Boston. That year he hit 19 homeruns with 103 RBI while putting up a .796 OPS. Those 103 RBI were third best in the AL that year. And his HR total and OPS placed him just outside the top 10 in the AL for both stats. That earned him 14th place in the MVP voting that year. He was pushed out at first during the '61 season by Pete Runnels. The Sox placed Wertz on waivers late in the season and he was taken by the Tigers.

After he retired, Wertz raised millions for charitable causes like the Special Olympics and the Boys and Girls Clubs. He passed away in 1983. 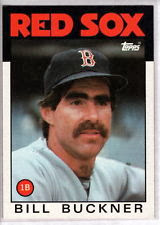 4. Bill Buckner (1985-87) - We've all agreed to forget about the '86 Series, right? Three titles in 10 years have a way of healing old wounds. Plus, you can just get lost in those eyebrows... So let's look back at Buckner's career with a less jaundiced eye.

Buckner came to Boston in May of 1984 in a trade that sent Mike Brumley and Dennis Eckersley to the Cubs*. This was to solidify first base, which at that time was being manned primarily by Eddie Jurak**. And what got lost in the all the drama after the 1986 season is that Buckner helped put the team in a position to make it to the Series in the first place.

It was 1985 that was his best year in Boston, though. He played all 162 games. His .299 batting average was 8th best in the AL. His 201 hits were third best. His 46 doubles put him behind only Don Mattingly in that category. He knocked in 110 runs for 6th place in the AL. And his glove was solid too. His Range Factor per game at first was 9.68, 4th best in the AL. And yet he didn't make it to the All-Star game that year.

After the 1986 season, Buckner came back in 1987 but the mood had gotten ugly. He was constantly heckled, both by the hometown fans and on the road. In the end it was too much and the Sox released him that July. Thankfully, Boston fans got a chance to make things right in 2008 when Buckner threw out the first pitch at the home opener. They gave him a four-minute standing ovation. All's well that ends well.

3. Mickey Vernon (1956-57) - Vernon came to the Sox on the tail-end of a 20-season career through a trade with the Washington Senators. But he delivered two solid seasons for Boston while covering first base. In 1956, at the age of 38, he batted .310 with an OPS of .914 and made the All-Star game. In 1956 he was Top 10 in the AL in batting average, on-base percentage, slugging, OPS and doubles. At the end of the 1957 season the Sox placed Vernon on waivers.

He went on to play three more years. In 1960, his last season, he played for the Pittsburgh Pirates. He was the first base coach but was activated during the September call-ups. That year he got the World Series title that had eluded him his entire career.

* Younger fans may not understand the logic of this deal, knowing Eck as the Hall of Fame reliever and great color commentator that his is today. But at this point in his career, he had a major problem with alcohol. He wouldn't go into rehab until 1986.

** Ed Jurak didn't do much of anything in the pros. But he was a monster in the minor leagues. I saw him during his minor league days in the early 80s when the Sox AA affiliate was in Bristol, CT. In 1981 he won the Eastern League batting title with a .340 average. And that was pretty much the highlight of his time in the Boston system.****

*** With three of the Teammates on the Wall, that begs the question: Should DiMaggio get his number retired as well? It would be bending the rules again, but he spent 10+ years with Boston (11) and unlike Pesky he spent his entire career with Boston. You could also argue his numbers are better. This isn't me saying Pesky doesn't belong on the Wall - he does. I just think that if Pesky is up there, then Dom should be there as well.

****Jurak was drafted in 1975 in the third round. That draft was one of Boston's worst ever. The standout player from that draft? Dave Stapelton.
Posted by Dave at 12:15 PM

Even before the Sox broke their WS drought, I always felt that Buckner was unfairly scapegoated for '86. If you look at the right replay, it clearly shows that Mookie Wilson was almost at the bag when that grounder went through Buck's legs. I won't bother going into what the score was at the time. The lack of the managerial move that led to that moment. The implosion of the bullpen. Mostly because I know you're aware of all of that. Always nice to see him get his due.

Lake of the Woods said...

As a Red Sox little league manager in Seattle (and lifelong sox fan) I refused to give out the number 6 to my little guys for fear of incessant heckling from opposing Yankee and Met little league teams. But now that it is associated with Pesky, the number has returned to respectability and we even consider giving it to our first basemen. Unless they have mustaches and a limp (which would just be too much).