Larry Lucchino Gets the Better of Randy Levine

Well, I guess Spring Training was a little too quiet. So Larry Lucchino decided to stir things up a little bit by taking a couple of verbal shots at the Yankees


"We’re very different animals,'' the Red Sox CEO said of the Sox and Yanks. "I’m proud of that difference. I always cringe when people lump us together."

The Yankees, said Lucchino, "are still, this year at least, relying heavily on their inimitable old-fashioned Yankees style of high-priced, long-term free agents. And I can’t say that I wish them well, but I think that we’ve taken a different approach." It should be noted here that Lucchino, for once, is 100% right. The Red Sox and the Yankees have become two very different animals. With the changes to the CBA, how the draft now works with regards to bonuses, the enhanced value of draft picks and even the rules extending to international free agents, the Red Sox have adapted and the Yankees have not.

The Red Sox have been judicious in the free agent signings, making sure not to lock in for too many years. They have drafted smartly and used draft picks to restock the system. The Yankees have done the opposite. They have signed expensive free-agents to long-term deals and given up draft picks for the privilege of doing so. The smartest thing the Yankees have done in months is sign Gardner to that four-year, $52M deal. And that's about it. Even the signing of Masahiro Tanaka is a gamble thanks to the fat contract he was handed.

The result is that the Red Sox have won three World Series in the past 10 years to one for the Yankees. And it looks a lot more likely that the Sox will win a fourth before the Yankees win their second. That's just the truth of it.

So after Lucchino's broadside, Levine responded in kind:

“I feel bad for Larry; he constantly sees ghosts and is spooked by the Yankees," Levine said. "But I can understand why, because under his and Bobby Valentine’s plan two years ago, the Red Sox were in last place."

"[Boston general manager] Ben Cherington and the Red Sox did a great job last year winning the World Series," continued Levine, "but I’m confident [Yankee GM Brian Cashman and manager Joe Girardi] and our players will compete with a great Red Sox team to win a world championship this year."

Now, I will give Levine credit for the Valentine dig at Lucchino. Lucchino was the one who insisted on and got Bobby V here, and then ludicrously defended him the whole season. He went so far as to say that Valentine had done "a good job" in August of 2012. At that point the Sox were 55-57. So Levine isn't off-base on that statement.

The problem is that it occurred two years ago. And the year after the Sox immediately righted the ship and won a title. Which makes that dig a lot less effective. That would be like teasing someone for being out of shape two years ago right after they won a marathon. It just looks bad.

The rest of Levine's comeback was just sad. The Sox are "spooked" by the Yankees? Yeah, they're really scared of a team that gets younger when they sign 31-year-old players. The only thing that is frightening about New York is the quality of their infield. 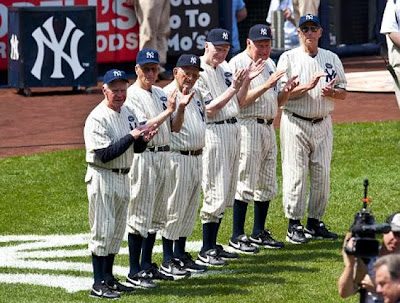 Part of the starting lineup for the 2014 Yankees


And Levine is confident in Cashman and Girardi?? Look, Girardi actually did a damn good job last year. The Yankees won a few more games than they should have with that lineup and all credit to Girardi for making that happen.

But Cashman?? Really? What has he done to earn that? I mean, if there is a championship for throwing away draft picks and anchoring the Yankees to long-term deals that will go bad after two years, then I guess he's been awesome. And as a Boston fan I encourage him to keep on doing the same thing. But if you are a Yankee fan the idea that Cashman will continue to stick around with the support of the front office should fill you with dread. He has shown no ability to adapt to the new fiscal landscape in MLB.

It's weird to see the historical balance of the Boston / NY rivalry inverted after all these years. Boston is now the dominant team and New York is floundering about with mediocre leadership. It is interesting to see how hard it has been for New York to function lately now that their single-largest advantage (ungodly heaps of money) has been neutralized to some extent.

And Yankee fans? You should be horrified. Horrified that Levine and the Steinbrenner Boys have put the Yankees in a position where someone like Larry Lucchino can score points off them in a newspaper. Even Boston fans don't like Larry all that much. And he made Levine look pathetic.