The number ‘7’ has been seen on the back of quite a few players, 31 to be exact. Some of those players were excellent, some were good and some…well, Easy Ed Romero wore it in 1986. Nevertheless, some damn fine players for the Sox have worn the ‘7’, including one of the most beloved Sox players of all time. 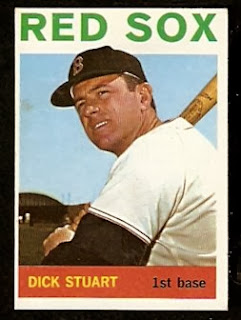 5. Dick Stuart (1963-64) - Stuart came to Sox in a trade with Pittsburgh in November of 1962. He left almost exactly two years later in a trade with the Phillies. But in between, he was a monster at the plate for Boston. His two-year average:

Stuart also had some of the best nicknames in the game. His poor fielding at first earned him the legendary nickname "Dr. Strangeglove" even before he came to Boston. Once there, his struggles in the field earned him another name; "The Boston Strangler". Had the DH position existed in the 60s, Stuart could have possibly been a legend.

4. J.D. Drew (2007-2011) - Would that Drew had played with half the fire of Nixon. I don't like putting him here. I was never a big fan of Drew's. I think paying him $14M a year was way too much considering his production. Nevertheless, his numbers warrant his inclusion.

In his five seasons with Boston, Drew was a .264 hitter with an OPS of .824. That's an OPS+ of 114. He averaged 16 HR and 57 RBI per season, and averaged 2.3 WAR per season. He was named to the 2008 All-Star game. He had a pretty good glove, leading AL right-fielders in fielding percentage in 2009 and 2010. But his range factor in right was always below the league average. Which means he caught the balls he reached...but he wasn't reaching as many balls as he should.

The simple truth is that Drew's numbers never matched up to his talent or his paycheck.

The interesting thing about Burleson is that his glove disguised his deficiencies at the plate. His average OPS was just .688 in his seven years in Boston, but he averaged a 2.6 WAR. That is because in four of his seven seasons his defensive WAR exceeded his offensive WAR. 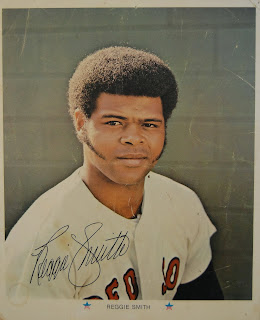 Not that it has anything to do with his time in Boston, but Reggie Smith is likely best known to you for two incidents in the NL. When he was with the Dodgers in 1978, Don Sutton said he was more important to the team than Steve Garvey. That led to the famous wrestling match between the two. Then in 1981, a fan in Candlestick Park hucked a batting helmet at him after some back-and-forth jawing. Smith, standing at six feet and almost 200 pounds, leaped into the stands and pummeled the poor bastard. Suffice it to say, he was ejected.


If there was a list of the all-time under-rated baseball players, Dom would have to be on the list. You look at his numbers and you cannot deny his talent. Yet how often is he ever in the modern-day conversation of great Sox players? And as I stated in the last installment, why has there been no movement to retire Dom's number? If the Sox were willing to bend the rules for Pesky, then Dom is worthy of the same consideration. And don't get me started on Dwight Evans.
Posted by Dave at 11:15 AM