Let's be honest...there's only one name that is going to appear here. Trying to pick four other guys to share this space with the greatest hitter ever is a waste of time. I will only note one interesting thing. The '9' was also worn by Bobby Doerr in his rookie year of 1937, which means two Hall of Famers wore the '9' and both had the numbers they were best known for retired by the Sox. I believe this is the only number to hold that distinction.

5, 4, 3, 2 and 1. Ted Williams (1939-60) - If baseball had given out the Rookie of the Year award in 1939, Williams would've had that honor as well. It's not every player that hits .327 with an OPS of 1.045, 31HRs and 145 RBI at the age of 20. So he just had to settle for fourth-place in the MVP voting (ahead of him were Joe DiMaggio, Jimmie Foxx and Bob Feller.) I don't think too many players had more nicknames than Williams. Teddy Ballgame. The Kid. The Splendid Splinter. The Thumper. But maybe a hitter as great as Williams simply can't be summed up with just one moniker. 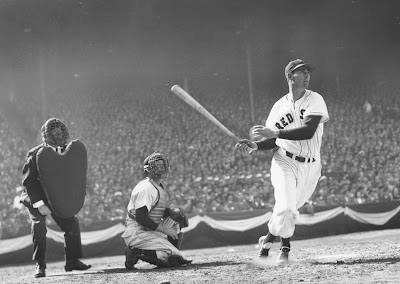 
If I tried to break out every award and Top 10 finish Williams had in his career, this entry would be 10,000 words long. So let's just hit the highlights:

And it goes on and on. Home runs, walks, RBI, total bases...you name any category outside of steals and Williams will likely rank amongst the best ever. There was no better hitter to play the game. And let's not also forget that he served his country in two wars, flying for the Marines in both WW2 and the Korean War. He even won the Air Medal after a mission attacking a tank and infantry training school and flying his damaged aircraft home. Those five years in the military were five of his prime playing years. Who knows what numbers Williams could've posted?


Greatest hitter ever, hands-down and no contest.