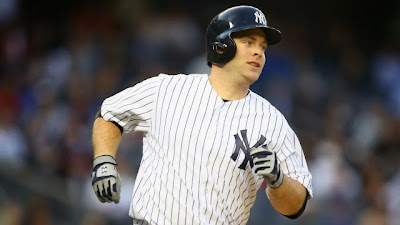 Whether you are a hard-core baseball fan or just aware of it during the season, you know that baseball uses analytics to a higher degree than any other sport.

PECOTA. WAR. BABIP. And many more. Some are basic and some are heavy on the math. Some are used just on a player and others can be used to project how a team will perform. But all of them try to take the statistical noise and turn it into something useful.

Today we are going to start looking at Boston and New York, position by position and their likely starters. And we will be using ZiPS to see how they stack up against one another.

ZiPS is used over at fangraphs.com. (Aside: fangraphs.com and baseball-reference.com are two incredible sites for baseball stats). Rather than trying to explain it, I will just use their explanation here:

ZiPS - The work of Dan Szymborski over at Baseball Think Factory, the ZiPS projections uses weighted averages of four years of data (three if a player is very old or very young), regresses pitchers based on DIPS theory and BABIP rates, and adjusts for aging by looking at similar players and their aging trends. It’s an effective projection system, and is displayed at FanGraphs for off-season and in-season projections.

That's pretty straight-forward. DIPS is "defense-independent pitching statistics" which measures the effectiveness of a pitcher only on statistics that don't involve other fielders. In other words, it only cares about what the pitcher has direct influence over. BABIP stands for "Batting Average on Balls In Play".

So what we hope ZiPS will do is give us a relatively accurate look at how a player will perform in the future based on their performance in the past. It's not perfect but ZiPS has been pretty reliable.

So with all that in mind, let's look at the likely starting catchers for the Red Sox and Yankees.

So it is fair to say that the Yankees have a clear advantage over the Sox at catcher. But it is also worth noting that it's not a massive advantage either. Especially when you factor in the cost per WAR. Because of Vazquez's age and favorable contract, he costs Boston less than $300K per win he brings to the team. McCann, as a veteran getting paid $17M this year, costs the Yankees about 19 times more per win than Vazquez.

Now, if you are on the cusp of being competitive for a title, that extra win+ that McCann gives you is critical. But if you aren't, it's worth asking whether the extra 1.3 wins is worth the extra money you are paying out. And maybe to New York it is. But it's a question worth asking.

Two more interesting things to note in the ZiPS projections: