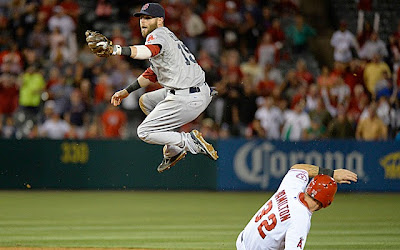 In the first two installments, we've looked at catcher and first base for both Boston and New York. And while the Yankees are getting slightly better projected production at both positions, it's at a much higher cost per WAR than Boston is paying.

We aren't going to have that problem here.

At second base you have a Rookie of the Year/MVP/Gold Glove winner (x4) in Boston. In New York, you have Stephen Drew.

Yeah, not much to say after that. But let's look at the lines anyway.

Now, it isn't all roses and candy with Boston. This projection for Pedroia continues a year-over-year decline for Pedroia in some key stats. But his defense is still solid and that mitigates some of his decline in production. Also, his salary is very team-friendly so even if he gets worse, Boston isn't stuck with a insane Ryan Howard-esque contract that hurts the team.

But Drew's projection is abysmal. It is so bad you have to wonder why the hell Cashman signed him in the first place. The cost per WAR for the Yankees is actually higher than what Drew gets paid. Drew actually sucks an extra $1.2M of value out of the Yankees. That is how bad Stephen Drew is. There is nothing in his projection I can point to and say, "Well, at least there's this...

There's nothing. Drew is a black hole where money and talent go to die.

Actually, there is one possible silver lining. Jose Pirela, one of New York's better prospects, projects to have 1.5 WAR this year. And while that isn't great, it's almost twice what Drew is giving New York. And if Pirela is making the minimum $500,000 or so, then his cost per WAR is a ridiculous $333,333. But hey, don't worry Yankee fans. Cashman has no interest in putting Pirela at second any time soon. Because why get cheaper and better when you can pay someone millions of dollars to suck?

It's just madness. Boston would be justified paying Pedroia $5 or even $6M for each of those wins because that is the difference between the post-season and golf for a team many expect in the playoffs. But for New York, who have little if no chance of making the playoffs, there is no logical reason to pay this kind of money.

Boston comes out ahead at second both in production and cost. It's not even close.
Posted by Dave at 2:57 PM