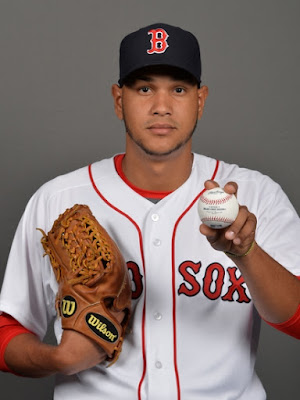 During last year's debacle, the Sox traded Andrew Miller to Baltimore for an (at the time) unknown left-handed pitcher in Double A named Eduardo Rodriguez. The book on him was that he was very talented but his control wasn't the best. At the time he hadn't been able to get his K/BB ratio above 3.00 and his WHIP hovered between 1.207 and 1.440.

Since that trade Baltimore lost Miller to free agency and the Yankees (where he has excelled). And Boston debuted their newest pitcher last night. Rodriguez gave Boston one of the best first outings in team history, a 7.2 inning shutout with three hits, seven strikeouts and just two walks. Boston beat Texas 5-1 and all of a sudden people are a lot more positive in Red Sox country.

The temptation after a debut like this is to believe that everything has changed and this new savior will lead the team to the promised land. Which is a pretty crazy way to look at this, but it does happen. What is fair to think is that Rodriguez may well be better than Joe Kelly and should take over his slot in the rotation. Because I am pretty sure that if the Sox brass send Rodriguez back down to Pawtucket, Boston fans will collectively lose their minds.

And I have to admit I was wrong about whom the Sox would call up. I really thought Brian Johnson would get the nod since he was older and arguably pitching better than Rodriguez down in Pawtucket. But if this is what happens when I am wrong, then I hope to be wrong more often.

It also helped that Boston provided Rodriguez with actual run support. Three of the five runs came with two outs, a situation in which Boston has struggled all year long. Hanley Ramirez launched his 11th homer of 2015 as the DH, with Ortiz taking a breather. Really, the only negative from the plate were the five double-plays Boston hit into.

We also have to mention the Ortiz "situation". I use the quotes because we don't really know what the heck is going on there beyond that he has been in a brutal slump. It could be an injury. It could be a flaw in his swing. It could be that, at age 39, Father Time has finally caught up with Big Papi. What we do know is that Ortiz has a .679 OPS, a batting average approaching the Mendoza Line and a negative WAR. And in a season where the Sox are still in the race only because the rest of the AL East has also been exceedingly mediocre, you can't let anyone hitting like that stay in the lineup indefinitely. Hopefully it is nothing more than a flaw in his swing that he can identify and fix.

Tonight the knuckleballer Steven Wright takes the mound. It is supposed to be humid down in Arlington tonight with a possible passing thunderstorm. That should mean a bit of wind as well. Both those factors should help Wright's knuckleball move around and hopefully give Boston back-to-back wins.
Posted by Dave at 9:19 AM