Turning a Corner / Watching Out For Bats 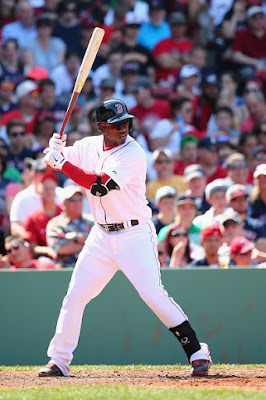 The standings don't show it. At 27-31, the Red Sox sit 5.5 games out of first. But Boston has won five of their last seven games, including a sweep of the Oakland A's as they wrap up a seven-game homestand. What is most encouraging is that in yesterday's game, the Sox actually rallied to win a game.

Down 4-0 in the eighth inning is usually where Boston goes down meekly and fans rub their heads in frustration. Yesterday it was where the Sox erupted for seven runs, sending 11 batters to the plate. By game's end, every Boston starter except for Ortiz had at least one hit.

The comeback covered for Clay Buchholz, who had a bad outing (4.2 innings, four runs on 10 hits). But this is his first non-quality start since May 4. So I think he has earned the benefit of the doubt and we should not freak out quite yet.

This series definitely washed away the bad taste that the Minnesota series left behind. Despite splitting the series the Sox should have won at least three games. That 8-4 loss in their last game, with three errors and horrendous base running compounded by allowing four runs in the top of the ninth, felt like the nadir of Boston's season. To then come back and sweep Oakland was desperately needed.

The temptation now is to read too much into this sweep. While yesterday's comeback was thrilling, it was made possible because Boston could do nothing against Oakland starter Kendall Graveman. He held Boston to one run on six hits over seven innings. And he is not an ace; he is 3-2 with a WHIP of 1.59 and a 4.83 ERA. A lineup with Boston's talent should be tagging a pitcher like that. Instead, they were mostly useless until Castillo hammered a 380 foot homer off him to start Boston's eighth-inning run. The hope is that this offensive explosion kick-starts a more regular offensive output. The reality is that that may happen...or it may not.

The last time Boston posted seven or more runs was May 23. Before that it was April 24. By contrast, the Yankees have scored 7+ runs four times in their last 13 games. Toronto has scored 7+ runs four times in their last five games. The teams ahead of Boston in the AL East are operating on a different offensive level right now. Until the Sox can replicate yesterday's scoring on a regular basis, they will struggle to make up that 5.5 game gap their are facing.

I feel like something needs to be said about the bat incident on Friday night. By all accounts, it was a gruesome injury (I refuse to watch the video). And the blame is focusing in two directions; the maple bat Brett Lawrie was using and the netting behind home plate.

I have sat behind home plate a couple of times at Fenway, courtesy of a generous brother-in-law who treats me way better than I deserve. The netting stops right where it lines up with the on-deck circle. I have had a couple of fouls balls come back at me off the bat, thankfully where the netting is.

Things happen fast behind home plate. It's not like being down the lines, where you have a second or two to process what is happening. The ball would come back off the bat and hit the netting in a split-second. Now imagine there is no net and it's razor-sharp shards of maple.

The players blame the lack of netting. Popular opinion is focusing more on the bat. Truth is, both sides are right.

Maple bats came into favor thanks to Barry Bonds PEDing his way to the home run title. It's a strong wood like ash. But it's not as flexible and more prone to shattering. And when a maple bats shatters, it sends some big, jagged fragments flying everywhere. The Cubs' Tyler Colvin got pole-axed by a broken maple bat in 2010 that collapsed his lung. It was only a matter of time before a fan suffered a similar fate.

But the netting behind home plate could easily be extended further. A logical extension would be to run it from home plate out both ways to the beginning of the dugouts on either side. And while that may remove some thrilling foul-ball catching attempts, it will make things a lot safer. The netting absolutely does not ruin the viewing of the game. If it did, no one would sit behind home plate.

The NHL already had to face this issue with the tragic death of Brittanie Cecil in 2002. The resulting mandatory netting at both ends of the rink have helped to prevent a similar tragedy and have not impacted fan enjoyment of the game.

Major League Baseball is fortunate that this recent event did not result in a fatality as well; it very easily could have. Expanding the netting is a no-brainer in my opinion. As is either altering the way maple bats are made or getting rid of them.
Posted by Dave at 10:54 AM