Under the radar last night, the Red Sox rolled back part of one of the dumber trades Theo Epstein has ever made as GM. The Red Sox got left-handed pitcher Kason Gabbard from the Rangers in exchange for cash.

Gabbard, if you don't remember, was sent to Texas along with David Murphy for the walking disaster that was (and is) Eric Gagne back in 2007. It's a testament to the team that they were able to win the World Series with the Automatic Hit Machine taking the mound in key spots.

Almost every Sox fan I know or heard or read was opposed to the trade. No one thought that Gagne could handle the pressure-cooker that is Fenway Park. No one except Theo, that is. And so a promising lefty and a talented outfielder were sent to Texas for a guy who gave up hits at a .325 clip while taking HGH. Ugh. 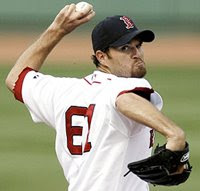 But now that trade has been partially expunged. I have a soft spot for Gabbard, having watched him in AA Portland before getting called up to Boston in 2006. He is one of those crafty left-handers, using a variety of off-speed pitches to induce a lot of grounders. And while he is in AAA Pawtucket (aka The Bucket) right now, it would not be surprising to see him in Boston later this year.

The fact that Boston got him for cash is telling as well. Tom Hicks' money issues are well-known at this point. But while Hicks and the Rangers have tried to explain that away, the facts are a different thing altogether. If the Rangers are selling off Gabbard for cash, that tells me Hicks is trying to raise cash fast to make his payments. Now if Boston could only pull a similar deal for Teagarden...

Bottom line, though, is that a pitcher that should have never been traded is back with Boston. Gabbard is a 4/5 pitcher, maybe a 3 if you have limited arms and he is on every single night he starts. But as the Sox have shown so far, you can never have too much pitching. So welcome back, Kason. We missed ya.