Basking in the wake of an improbable championship, it is easy to admit the obvious: No Red Sox fan thought they would win another title this year. I sure as heck didn't. Sure, a fan here and there may have taken a flier on a straight bet in Vegas, but no one really believed the Sox would win their eighth championship. 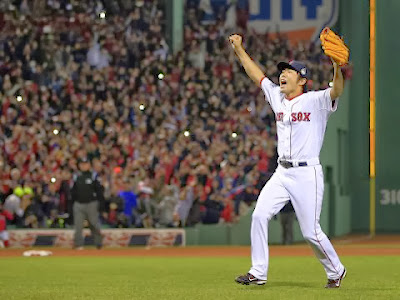 
After an epic collapse in 2011 and the disastrous one-year reign of Bobby Valentine, 2013 was viewed by many as a rebuilding year in Boston. By shipping off the over-sized contracts of Gonzalez, Beckett and Crawford to L.A. and bringing in "chemistry" guys like Shane Victorino and Mike Napoli, the expectation was for Boston to regain some level of respectability. Finish the season better than 81-81. Maybe, if everything broke right, they could sneak a wild card spot.

But this? This amazing, epic, incredible run? A season that has echoes of both 1967 and 1986 surrounding it? This was a season for the ages, perhaps even more impossible than the vaunted 1967 season. It shouldn't have happened...and yet it did.

It happened thanks to equal parts of good decision-making and good timing. The Sox laid the groundwork for this season in the debacle that was 2012. Jettisoning Gonzalez, Beckett and Crawford to LA was a miracle move by Ben Cherington. No team should have rationally decided to take on $270M worth of contracts. But the new ownership in Dodgertown wanted to make a statement. And they did. That statement also enabled the Sox to clear the decks for 2013.

They took that money and signed up character veterans like Shane Victorino, Mike Napoli, Koji Uehara and Jonny Gomes. The emergence of Xander Bogaerts allowed the Sox to use Jose Igelsias as trade bait to take on the salary of Jake Peavy (14.5M in 2014, 15M player option in 2015 if benchmarks are met) in a key mid-season trade.

The Toronto Blue Jays, after two consecutive fourth-place finishes, agreed to let John Farrell return to Boston as their new head coach along with swapping Mike Aviles for David Carpenter. Farrell was known for his touch with the pitching staff in Boston when he worked with Tito. Call it coincidence or direct effect, but Farrell's return meshed with a return to form for Boston pitching.

But the real pitching story was John Lackey. The fans in Boston were tired of him (I'll admit to it as well). His record wasn't worth the money he was getting. When he went on the shelf for all of 2012 most people considered it addition by subtraction.

This year? No one saw it coming. His 10-13 record is an unfair reflection of how Lackey pitched. He had an ERA of 3.52 and a WHIP of 1.157. He had a strikeout/walk ratio of 4.03. Two-thirds of his starts were quality starts. He should have had a record like Lester's.

But his run support per game was just 3.7 runs. That wasn't only the lowest total for any Boston starter, it was 1.3 runs worse than the guy above him - Jon Lester. It was over half-a-run worse than the league average (4.4 runs per game). Had Lackey gotten that kind of run support, he'd have likely been somewhere between 14-9 and 17-6 at season's end.

And the relief pitching...after a very rocky beginning they clicked. Uehara became Mo Rivera 2.0 and they found some good bridges in Tazawa and Workman.

All of this was combined with excellent work at the plate and in the field. Shane Victorino had his best season in three years, with an .801 OPS while winning his fourth Gold Glove. Napoli bounced back from a rough 2012 to come close to his career average numbers while registering the second highest WAR of his career (4.1). Pedroia had a typical Pedroia year: better than .300 batting average, OPS+ over 100, All-Star appearance and Gold Glove (his third).

And then there is Big Papi. The interesting thing about Ortiz as he gets older is that he has become a better hitter as opposed to a slugger. For the first time in his career, he has had three seasons in a row with a batting average better than .300. He has cut down his strikeouts (three seasons of less than 90 strikeouts). And that patience has translated into getting better pitches. The result is that Ortiz cracked 30+ home runs and 100+ RBI for the first time since 2010. His 292 total bases is his best total since 2007. He was intentionally walked 27 times, a career high. His WAR this year was 4.4, his highest since 2007. It was, in all aspects, a remarkable year. 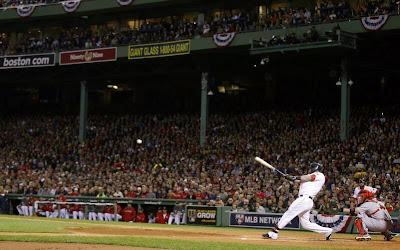 
And all of this was prelude to the post-season. To Jon Lester channeling Bob Gibson in the World Series. To David Ortiz saving Boston in the ALCS and then destroying St. Louis with his bat. To Uehara somehow becoming more devastating as a closer. To Victorino, Napoli and Jonny Gomes becoming heroes to a whole generation of Boston fans. To John Lackey tipping his cap to the Fenway faithful in Game Six and the crowd returning the favor.

All that, and so much more, was born in the rubble and the fallout of 2012. The worst season in Boston since 1965. To go from that to this...an Impossible Dream? Perhaps. An Improbable Dream? Most definitely.
Posted by Dave at 12:01 PM