Is Jacoby Ellsbury worth a $140M Contract?

I ask that question somewhat facetiously because, in my opinion, no one is worth that kind of money. But GMs being who they are, that kind of money routinely gets paid out. Regardless of whether it makes any kind of sense.

No, the real question is "Should the Red Sox give Jacoby Ellsbury a $140M contract?" Because at the end of the day, some team will give Ellsbury a contract similar to what the Red Sox gave Carl Crawford not too long ago. A seven-year, $140M+ anchor disguised as a contract. And you should be able to tell from that last statement where I land on this issue.


The second Jacoby Ellsbury is made of glass. He is a fragile player who is out of commission for large parts of a season. You cannot rely on him to even play half a season.

The inherent problem, obviously, is that you cannot sign the first Jacoby Ellsbury on his own. They are a package deal. And that makes the idea of giving him a long-term, big-money deal very problematic.

The Sox just got out from under $270M worth of bad contracts last year. To immediately tie up over 50% of that number in another long-term deal would only make sense if the player in question was a top-level player year-in and year-out. You look at someone like Miguel Cabrera. Going back to 2010, he will earn $126M over six years. But he has also averaged 155 games played per season since 2010 and has arguably been the best position player in the major leagues. You could make a rational argument (in the world of baseball and baseball salaries) to pay a player like that $20M a year.

You also have to consider whom the Sox have in the pipeline. And that would be Jackie Bradley, Jr. He has shown flashes of being a good big-league player. Is he in Ellsbury's league yet? No. But he didn't commit any errors in 16 starts in center field and showed some serious speed on the basepaths. And he made only $490K last year. 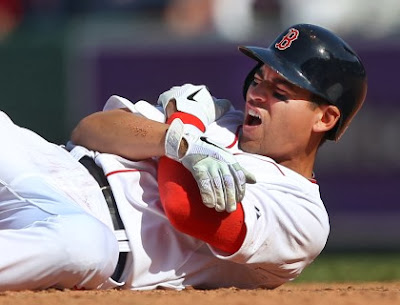 
I am a big Ellsbury fan. I really, truly am. He is one good season away from being the all-time steals leader for Boston (he trails Harry Hooper by 59) and I would love to see him take it. But not at the expense of burdening the squad financially while taking a very real risk that Ellsbury will be unavailable to play for 50% or more of the duration of that deal.

The Sox did the right thing by extending Ellsbury the qualifying offer. And now Ellsbury will do the right thing for himself by finding a team willing to give him close to $20M a year. I hear the Dodgers love to spend that kind of money.

It may not be the ending we wanted for Ellsbury in Boston. But it's the right move for the franchise moving forward.
Posted by Dave at 12:43 PM