A year ago I was sitting at my desk at work when the first alert came across for an active shooter situation in Newtown, Conn.

Wait! What? Newtown? My colleagues and I were just at a restaurant there the night before for a surprise birthday party for our boss.

A short time later, the bulletin flashed. Shots had been fired at Sandy Hook Elementary School. 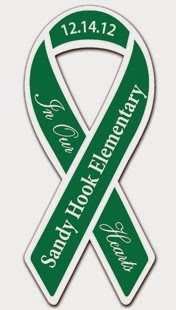 Could this really be happening less than 15 miles from where I work? From where I grew up? It didn't seem possible. Still doesn't. Stuff like that doesn't happen in towns like Newtown. The news reports had to be wrong. It must have been the work of the overzealous media, all too eager to break the story first, facts be damned.

It just couldn't be real.

By the time it was time to go home, the timeline of events of that dark, awful morning had been put together. Six brave educators and 20 innocent children slain at the hand of a mentally ill man who had gotten his hands on a small arsenal of guns.

THAT NIGHT, sitting at home and trying to comprehend what had happened, the thoughts kept popping in my head.

The educators were not that different than my own sister, an eighth-grade English teacher in Massachusetts hell-bent on giving her students every tool and every opportunity to fulfill every ounce of potential.

It could have been her.

It could have been him.

For 26 families, their worst fears had been realized, a nightmare brought to life.

That night, my grief was inescapable, my sobs unavoidable.

AT THAT MOMENT sports seemed so unimportant, so trivial.

It's not as if they are saving lives out there, making the next great medical discovery, unlocking the mysteries of the universe, rescuing children.

Sports are athletes playing games for our amusement, making millions.

But I still flipped on the NFL games that Sunday ... and was reminded why sports are so, so powerful.

Sports, quite simply are pure. On that field, race doesn't matter. On that court, religion is irrelevant. In that rink, social status means nothing.

Sports at their core are about human achievement, fulfilling potential, about becoming better than we dared to dream.

And when tragedies happen, sports allow us come together and to escape for two or three hours. In the midst of sadness, sports give us permission to cheer, to feel good for a while, to discover some semblance of normalcy.

Sports were so important that Franklin D. Roosevelt ordered Major League Baseball not shut down as the nation prepared to enter World War II.

Following John F. Kennedy's assassination in Dallas, the NFL played on, including the Cowboys hosting the Browns.

In more recent memory, in the aftermath of the Sept. 11, 2001 attacks, Mike Piazza's homer against the Braves in the first game in New York allowed the city to finally cheer after a week of sadness. The Yankees' journey to the World Series gave the city a ride it desperately needed.

And of course, last season, Boston needed its teams to deliver more than ever after the Boston Marathon bombings. And while I'm none too thrilled the Red Sox won the World Series, I do take solace that their success and victory may have comforted some of the victims. 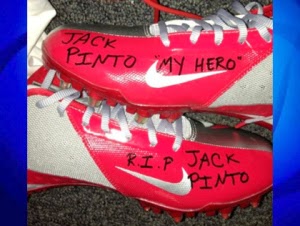 ON THAT DAY two days after the Sandy Hook shootings, sports gave us the opportunity to show our grief and to show our support for the people of Newtown as moments of silence were observed, messages were written on helmets. Victor Cruz paid tribute to his little fan, Jack Pinto.

And then, for a few hours, we were able to cheer again, to remind ourselves of our humanity and potential, to remember that there so much more good in this world than there is evil.

A YEAR AGO, 20 first graders and six educators were murdered. Since that day games, have gone on and life has continued, but we have not forgotten. We never will.

We are Sandy Hook. We are love.
Posted by Unknown at 7:00 AM