As the Winter Meetings come to an end with the Red Sox standing pat (which is a good thing), why not look back on what I think are the top five trades the Red Sox have made. This is, of course, a subjective list and your opinions may differ.

I tried to weigh impact and individual performance, which is why Joe Cronin and Lefty Grove aren't on the list. As good as they were, Grove's best years were already behind him and Cronin made more of an impact as a manager than as a player. And yes, this list is very top heavy with moves within the last 20 years or so. That is a reflection of just how piss-poor this team was at trading for players over most of it's existence. Hell, the entire 1920s is an apocalypse.

Honorable Mention. Red Sox trade Josh Beckett, Carl Crawford, Nick Punto and cash to the Los Angeles Dodgers for Ivan De Jesus, James Loney, Allen Webster, Rubby De La Rosa and Jerry Sands (August 25, 2012): Who the Sox got back in this deal wasn't the big win (although Webster and De La Rosa have some upside). It was dumping over $270M worth of contracts on the Dodgers to get into a position to improve the team. Without this trade, the Sox never sign Victorino, Napoli and Gomes, let alone win the World Series. They don't get to where they are today. They would be, and it may hurt someone else who writes here to hear it, the Yankees. Weighed down with players past their prime getting too much money.

5. Red Sox trade Gordon Rhodes, George Savino and $150,00 to the Philadelphia A's for Jimmy Foxx and Johnny Marcum(December 10, 1935): Rhodes would go 9-20 for the A's in 1936 and then drop out of the league while Savino never made it to the best of my knowledge. Marcum went 26-30 over three years for the Sox, but obviously this trade was all about Double-X. Foxx was a six-time All-Star in his tenure with the Sox, and won the MVP award in 1938. If it wasn't for the ridiculous talent level of the Yankees, Foxx and Williams likely would've gotten the Sox into the World Series in 1939. He was a phenomenal ballplayer and the Sox got him for nothing.

4. Red Sox trade Reggie Smith and Ken Tatum to the St. Louis Cardinals for Rick Wise and Bernie Carbo (October 26, 1973): Without this trade, who knows if 1975 holds as much meaning for Sox fans as it does today. Both Wise and Carbo would play a huge role in Boston's fortunes that year; Wise went 19-12 and Carbo knocked in 50 RBIs with an .891 OPS. And both played critical roles in Game Six of the World Series; Wise got the win that night and Carbo hit the three-run shot in the 8th that set the stage for Fisk's iconic blast in the 12th. What about Smith and Tatum, you ask? Reggie Smith went on to a pretty successful career. He went to five more All-Star games and won a title with the Dodgers in 1981. Ken Tatum? He was out of the game after the '74 season.

3. Red Sox send Casey Fossum, Brandon Lyon, Jorge De La Rosa and Michael Goss to the Arizona Diamondbacks for Curt Schilling (November 28, 2003): Not too much to be said here, right? Two World Series titles. The bloody sock. Solidified his reputation as the best post-season pitcher in recent memory. And all the Sox had to give up were a few mid-tier prospects. If you are going to trade for a veteran, kids, that is how you do it.

2. Red Sox trade Nomar Garciaparra and Matt Murton in a four-team deal for Orlando Cabrera and Doug Mientkiewicz; Red Sox trade Henri Stanley to L.A. Dodgers for Dave Roberts (July 31, 2004): I know they're two separate trades, but they both occurred on the same day and are so tightly entwined together than I took some creative liberties and combined them into one entry. The reason this was so big is obvious; this trade pushed the Red sox over the top and on their way to their first World Series title since 1918. Cabrera was great in the field (gosh, I'm so glad we ditched him for Rent-a-wreck), Doug was a top-flight glove at first and Roberts...well, all you have to say is "The Steal." Without these guys, could the Sox have won the Series that year? I don't think they could have. 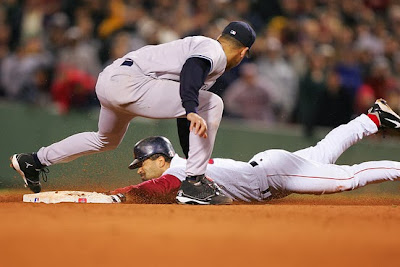 Looking at this never gets old


1. Red Sox trade Heathcliff Slocumb to the Seattle Mariners for Jason Varitek and Derek Lowe (July 31, 1997); Red Sox trade Carl Pavano and Tony Armas, Jr. to the Montreal Expos for Pedro Martinez (November 18, 1997): I know, it's even more of a stretch that what I did in the entry before. But these two trades were so pivotal to the Red Sox success that I couldn't choose one over the other. These three men were the cornerstone for the team that was built around them. The trade in 2004 never takes place without these two deals, because the Sox never would have been that close to competing for a title. Hell, Varitek was only the third captain in Sox history. Lowe and Martinez combined for 187 wins with the Sox, and Lowe tossed in that remarkable 42-save season in 2000. And Pedro...man, what he did for the Sox. He just made the place electric when he pitched. Four All-Star games and two Cy Young Awards (should've been three, he got ripped off by the 'Roid Rocket in 1998). So, say what we will about Dan Duquette. But he made two amazing trades that year and gave up nothing much in return.

What? The acquisition of Elston Howard doesn't rank in your top 5? Oh, wait. He didn't hit all that much for you guys and was released the following year. Nevermind.