OK, time to have a little fun.

Every year, the fine folks at Quinnipiac University in Hamden, Conn., conduct a poll of Connecticut residents to see where our baseball loyalties lie.

The results have been pretty consistent with about 42 percent of residents claiming to be Yankees fans and 37 percent Red Sox fans (and 8 percent Mets fans). The percentages may go up or down a point or two from year to year, but generally the Yankees outpace the Sox by 5 percent.

My good friend Dave often dismisses the poll, saying Fairfield County, the county that is closest to New York City and has the densest population, isn't really part of Connecticut and doesn't count. 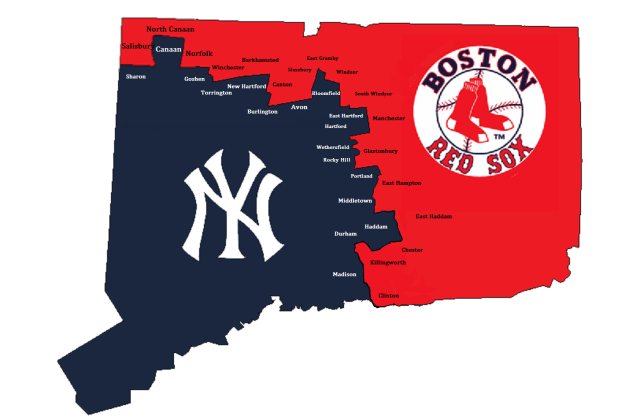 Turns out the clutches of the Evil Empire extends past Fairfield County.

Ben Blatt from The Harvard Sports Analysis Collective set out to determine the true border between the two warring baseball nations. The findings show Yankee Universe's reach extends well into this divide state.


Blatt collected his data by using Facebook's "Create and Ad" feature and pretending to buy an ad. That allowed him to access data from 2.5 million people in New England and New York who "like" either the Yankees or Red Sox, as well as where those people live.

That allowed Blatt to create a map of the rivalry border by figuring out the percentage of a team's fans in a given town. New York, of course went to the Yankees. The rest of New England went to the Red Sox. But the map above shows Connecticut much more evenly divided geographically than some others (read: Dave) had thought.

The best part? Farmington, which is where Dave grew up, isn't very strongly pro-Red Sox with only 53.6 percent claiming allegiance to the Nation.

Surprisingly, Hartford leans 57 percent pro-Yankee. How the heck did that happen?

Alas, the results are clear. It's not just Fairfield County carrying Connecticut's allegiance to the Pinstripes. The Yankees' influence runs quite deep.

But there is one thing Blatt's data show that both Dave and I agree is quite disturbing: about 262,500 people claim to like both the Yankees and the Red Sox.

They must wear pink hats.
Posted by Unknown at 7:03 AM