A Final Voyage For Captain Jeter

As I sat down to dinner with my son Jack Wednesday night, I asked him what he thought about Derek Jeter's announcement that 2014 would be his final season.

Leave it to a 7-year-old boy to simply state what not only every New York Yankee fan feels, but what nearly all baseball fans are feeling.

Jeter has finally hit that moment, to paraphrase the scene from "Moneyball," when he's being told he can't play anymore. 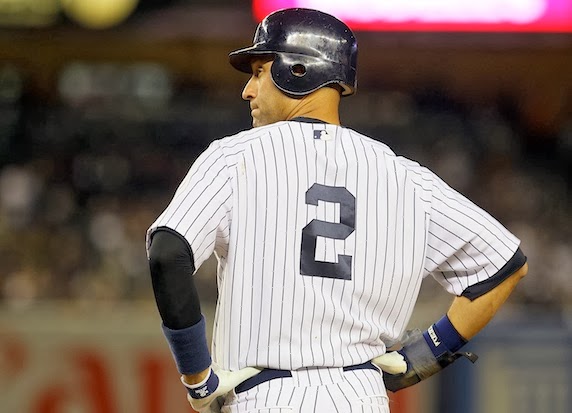 In Jeter's case, he's fortunate. His body is telling him at age 40, it's time. Most people get told at a much younger age. But Jeter clearly recognized that it's time to call it a career, writing:

"Last year was a tough one for me. As I suffered through a bunch of injuries, I realized that some things that always came easily to me and were always fun had started to become a struggle. The one thing I always said to myself was that when baseball started to feel more like a job, it would be time to move forward."

But for Yankees fans, Jeter's final season comes with an additional sting.

While we bid farewell to The Great Mariano Rivera, last season, we could take solace in knowing that we still had the Captain coming back this season, giving us one last link to our most recent championships.

But with Jeter's retirement, the era ends. Gone are Bernie William, Jorge Posada, Andy Pettitte, Rivera, and come the end of 2014, Jeter. It was an unimaginably successful season era, one that gave us championships, thrills and terrific players, two of whom will forever be ranked among the game's immortals

And you'd have to have the emotional range of a teaspoon (yes, a Harry Potter reference), not to feel sad about that. How likely is it that will we ever see a run like this again?

But in making his announce Wednesday, Jeter is giving us a chance to celebrate his career and to say thank you.

I'll say the thing that I'm most thankful for is that Jeter -- and Rivera for that matter --- played long enough for Jack to be able to watch them and form long-lasting memories. Jack will forever remember how Jeter played the game and how hard he work. And Jack has come to understand through Jeter -- and Rivera -- what it means to play the game with class, respect and sportsmanship.

While all those qualities are important, players get judged on how they perform. But in looking at Jeter, that gets a little tricky. When thinking about the areas of the game in which Jeter excelled, you really can't point to one aspect of the game where he was superlative 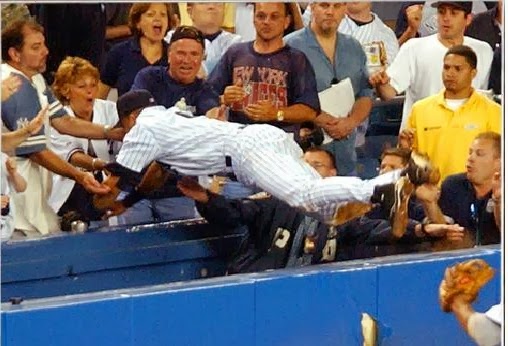 Yes, he's a great hitter with 3,316 career hits, but he's never led the league in average and led the league in hits just twice. He has good power for a shortstop, but hit 20 homers in a season just once. He has the most steals in Yankees franchise history, but that's only good for 20th among shortstops. He has five Gold Gloves, but Dave will all too willingly point out Jeter's lack of range and other defensive flaws

So what made Jeter great, a sure-fire, first-ballot Hall of Famer?

Well leave it up to Ben Thaler, a Red Sox fan and friend from my days at Camp Tevya in Brookline, N.H., to hit upon the answer. When Dave posted the news of Jeter's retirement on our Facebook fan page, Ben wrote:

"I for one am a fan ... the 'hatred' was more jealousy knowing that my team's HOF caliber SS had all the talent in the world but no brain or heart. I would have taken Jeter on my team any day."

With Jeter, it wasn't about the 1,876 runs, or .828 OPS, 1,261 RBI. It was always about one thing: Winning. That is where his greatness lies. Since he debuted in 1995, the Yankees have captured seven pennants, won five World Series, made the playoffs every year except for 2008 and 2013, and never failed to have a winning season. 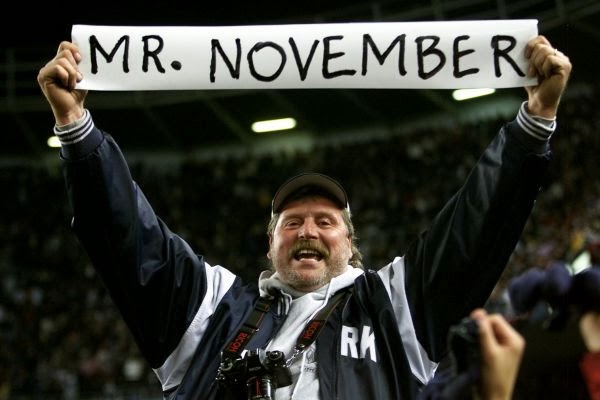 When we think about Jeter's career, it's not about superlative seasons or gaudy numbers. Rather it's about unforgettable moments that helped his team to win. It's the flip play and the dive into the stands, the first-pitch homer in Game 4 of the 2000 World Series and the Mr. November homer, the homer for hit No 3,000 and countless other moments.

In short it's all those moments that has us flocking to Steiner Sports to purchase memorabilia of this incomparable player.

But make no mistake, this is also a time for Jeter to reflect and celebrate his career, while thanking everyone who's helped, cheered and booed him.

"I want to soak in every moment of every day this year, so I can remember it for the rest of my life," Jeter wrote.

And no moments will be bigger than Jeter's final games. His last game at Yankee Stadium will be Thursday, Sept. 25 against the Orioles. Tickets have already become a hot commodity with ticket aggregator TiqIQ showing prices from $300 and up. And if the Yankees chose to have a Jeter Day on the prior Sunday, Sept. 21, like they did with Rivera, you can bet those tickets get snatched up fast.

But just to add to the drama, the Yankees' regular season ends in Boston on Sunday, Sept 28. Those tickets are also starting at about $300 and for good reason. The Red Sox did a great job with their tribute to Rivera last season. Can there be any doubt they'll do a great job with Jeter?

So while it will be sad to see Jeter walk off the field that final time,  it will be a memorable final voyage.

Thank you, Captain.
Posted by Unknown at 9:11 PM