Could We Hold Off on the Derek Jeter Tongue-bath For a Moment?

Derek Jeter is the greatest Yankee ever.

Derek Jeter is the greatest shortstop ever.

Derek Jeter is the greatest baseball player of all time. 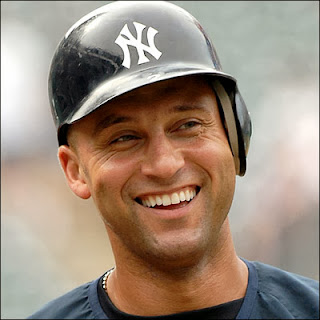 Let me say this right now. Jeter is a great player. A definite Hall-of-Fame inductee. Possibly the best-hitting shortstop of all-time.

But he is not - not - the best Yankee ever, the best shortstop ever or the best player of all time. He deserves tons of respect and accolades for his career. But when people begin to attach superlatives over and over and over again that aren't accurate, it stokes a backlash that Jeter really doesn't deserve.

It makes people who don't root for the Yankees want to pull their hair out. It makes us dread the entire 2014 season. Not because of what Jeter can do mind you. No, we dread the incessant sucking-up and over-the-top statements we'll hear all year. Fox Sports will be unbearable. I can't ever imagine how the YES Network will function; Michael Kay will probably just cry for entire broadcasts, the sobbing occasionally punctuated by him incoherently mumbling "THE GREATEST OF ALL TIME!!" John Sterling is probably wandering the Bronx right now, bursting into places and screaming "El Capitaine!" at anyone who will listen. 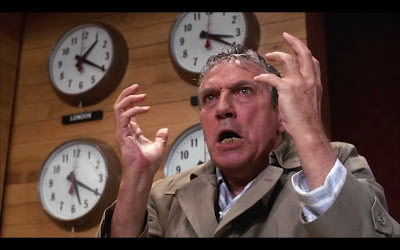 This may, or may not, be John Sterling yelling at people.


Thank God I have whisky in the cabinet.

Anyway, let's address those three statements at the top of the piece. All stats from the excellent and awesome website baseball-reference.com.

Derek Jeter is the greatest Yankee ever

Numbers don't lie, people. If you are talking about the greatest Yankees, you start with Ruth. After him comes the triumvirate of Gehrig, Mantle and DiMaggio. You can mix and match those guys although I personally think that Gehrig is pretty much ensconced at the second spot.

At that point Jeter comes into play. Being the fifth best Yankee of all-time is pretty damned amazing, considering the players that have been there. There is no need to inflate him and push him higher. It just looks ridiculous.

Although...I'd even place him sixth. Someone retired last year by the name of Mariano Rivera. First all-time on the Yankees in WAR for pitchers (56.6), second in career ERA (2.21) and Adjusted Pitching Wins (32.5), and the best career WHIP of any pitcher to wear a Yankees uniform (1.00). Oh, and 652 career saves, the best ever. It's kind of hard to leave Rivera out of the top five Yankees of all-time. 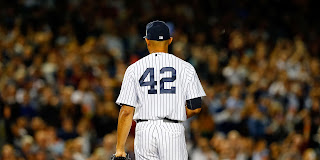 Seriously, did you people forget about him already?


Still...sixth greatest Yankee ever. That is hardly an insult. But the way people are going with the Jeter accolades this year, saying that will probably get you death threats.

Derek Jeter is the greatest shortstop ever

This one gets a little trickier and will likely be the area where most arguments take place.

You would be hard-pressed to deny that Jeter is one of the best hitting shortstops to play the game. But that's the qualifier and it is an important one: best hitting shortstop. And that matters. A lot. Because unless you are playing DH, then your position also requires you to play defense. And in that area, Derek Jeter was not that great.

People will immediately point to his five Gold Gloves. To which I would respond that he earned one of those. The rest came because fielding percentage is weighed too much in the voting. FP only measures the balls you get to, not the ones you never reach. And when it came to range, Jeter was average at best.

But even in hitting and overall impact, Jeter wasn't the best.

By OPS+ he is 27th all-time. He is obviously much better in hits (2nd behind Wagner) and runs scored (2nd behind A-Rod). But runs and hits are not the full measure of a position player.

Range Factor is when you use putouts and assists to help determine the impact of a position player on the field. You can either figure this out per game over their career or per nine innings. So if your Range Factor per game for your career is 4.00, then you averaged a combination of four putouts+assists per game for your career. This is useful because it takes into account a player's ability to get to balls hit his way.

If you look at Range Factor/Game, here at those same 10 players listed above and their position all-time for shortstops with a minimum of 3000 putout attempts and 500 games played:

Even in Fielding Percentage, the stat that got him those five Gold Gloves, he is 29th all-time at the shortstop position.

This isn't to say that Jeter is not a great overall shortstop. He is. And is he the best shortstop over the past 15-20 years? Yeah, you could make the argument. And that is likely why so many people want to say he is the greatest of all-time. Because in their lifetime, he may well be the best shortstop they ever saw.

But he is not the best ever. The statistics don't support that statement.

Derek Jeter is the greatest baseball player of all time

Like I said, Jeter is a Hall of Famer. One of the best to play the game. And he played it with class and style.

But when you start going overboard about his place in the history of the game, you ironically cheapen what he actually did. Because then it's like you're saying it's not good enough to be the sixth-best Yankee or 10th-best shortstop in the history of baseball.

Of course it is! It's amazing to be either of those things. And that should be celebrated.

But for the love of all that is holy, broadcasters and fans alike, keep some perspective. I'm begging you. 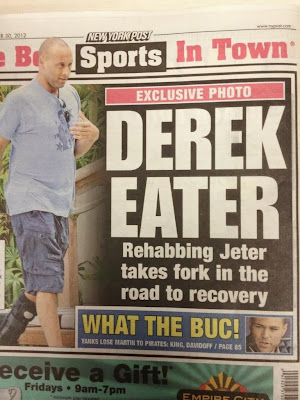 I'm just throwing this in because I find it funny as hell.
Posted by Dave at 11:55 AM

I have to say I agree with you, Dave.

In the aftermath of Jeter's announcement, there is a lot of hyberbole occuring.

Part of it is because he is deservedly a beloved Yankee and that warps perspective, for fans and homer journalists.

The other part of if it is that we are in the immediacy of his announcement, which is the very reason there is a 5-year waiting period on the Hall of Fame. Time allows us to gain perspective.

For example, when Don Mattingly retired, I felt he should have been a HoFer. Those 5 years in the 1980s were worthy of the Hall. But the Hall of Fame is based on an entire career, and with time I came to realize that as much as loved Mattingly, he just isn't a Hall of Famer ... despite his statistical similarity to Kirby Puckett.

Yes, Jeter is a Hall of Famer. Yes, he is one of the greatest shortstops ever. And yes, if you want to build a team of all-time greats and wanted him to be your shortstop, there would be nothing wrong with that ... you certainly would win a lot with him.