I think we all know who is going to top this list. But a surprising number of good players have worn the '8' for the Sox, including one player I had never heard of and has a decent case for a HoF bid. 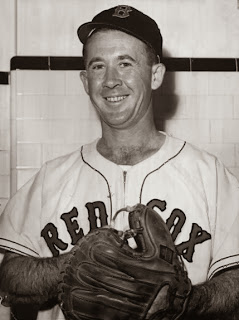 4. Birdie Tebbetts (1947-50) - And here is the guy Wagner was traded for. Born in Burlington, VT, raised in Nashua, NH and a graduate of Providence College (a philosophy major to boot), Tebbetts played 3 1/2 seasons with the Sox after being traded from Detroit, all at catcher and all wearing the '8'. While with the Tigers Tebbetts went to two All-Star Games. He went to two more with the Sox, in 1948 and 1949. Tebbetts also was in the Top 20 for MVP voting in both of those years. But Tebbetts was getting old by then; in 1950 he was the oldest player in the AL at the age of 37. He also slagged some of his teammates, calling them "moronic malcontents." So in the off-season the Sox sold Tebbetts to the Indians, replacing him behind the plate for one season with the immortal Les Moss before Sammy White took over for the next eight seasons. Tebbetts said of the sale that "I was sold for a dollar by one drunk owner to another." Tebbetts went on to gain more fame as a manager, even being named the NL Manager of the Year by the AP for getting the Reds into third-place in 1956.

Now, I had never heard of "Indian Bob" before I researched for this post. In 13 seasons, Johnson had a lifetime .296 batting average. He had 2,051 hits, scored 1,239 runs, drove in 1,283 runs and hit 288 homeruns. He recorded over 4,000 putouts and had a lifetime .968 fielding percentage in the outfield. Even today, Johnson is 147th all-time in home runs, 249th all-time in hits (more than Johnny Bench or Bill Mazeroski), 151st all-time in runs scored (more than Brooks Robinson, Willie McCovey or Willie Stargell) and is 118th all-time in RBI (ahead of Hank Greenberg or Pie Traynor). His OPS of .899 ranks 65th all-time. He is the all-time leader for assists by a left fielder with 184. So why isn't he even in the conversation for the Hall of Fame?

I can guess at the primary reason; he played during WWII when the talent level dropped. But last I checked, they don't discount stats from this era when compiling records, so it shouldn't count against him. His numbers are good enough to warrant at least a discussion about the Hall. If you use Bill James' HoF Monitor metric, "Indian Bob" scores a 92 where a 100 represents a good chance to make the Hall. His JAWS score of 57.1 WAR is 19th all-time for left fielders. The exact same score as Ralph Kiner...who is in the Hall of Fame. So why have I never heard of this guy before now? It makes me want to start an "Indian Bob for the Hall" movement even though he'd wear an A's hat if he went in. 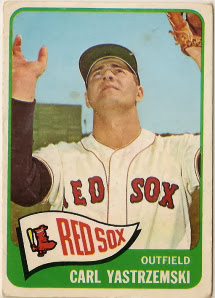 Yaz is truly one of the living legends of the sport. And the cherry on the top was when he got those well-deserved WS rings from the Sox as a staff member. He may not have gotten them as a player, but he sure as Hell earned them.
Posted by Dave at 11:36 AM