Putting the Pine in Pineda

What we should really be talking about this morning is the awesome pitching performance of John Lackey. Last night against the Yankees he went eight innings and gave up just one run on seven hits. He struck out eleven batters and walked none. Of his 111 pitches, he threw over 75% of them for strikes. A dominant outing for Lackey, and one that propelled the Sox to a 5-1 victory.

We should be talking about the rock-star season Mike Napoli has delivered so far. The only hitter to be consistently good for Boston in 2014, he went 3-4 with an RBI last night. He has a .947 OPS and leads Boston in pretty much every meaningful batting statistic except for OBP, where he's second.

Instead, we're all talking about Michael Pineda and his terminal stupidity.

In case you forgot or missed it, there was a pine-tar issue the last time Pineda faced the Sox. Remy and Orsillo treated an image of something on Pineda's hand like the baseball version of the Zapruder film. And it allowed Boston fans to ignore the fact that Boston lost that game not because of Pineda's hand, but because Boston's hitting was pathetic in general at that point.

This time was different, in so many ways. Pineda came out clean to start the game. But after getting tagged for two runs in the first, he came out in the second looking like he smeared motor oil across his neck. 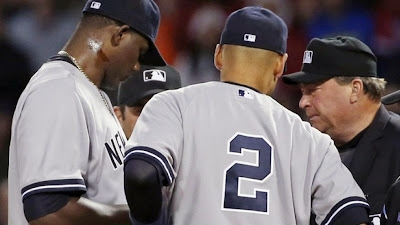 Seriously? You could at least try to hide it.


In the first game, John Farrell didn't call it to the ump's attention. This time, he made sure to do so.

And this time, it happened with Boston in the lead and hitting well. Which made it look even worse.

The upshot was that Pineda was ejected (which was the right call) and will likely face a suspension. To me it should be 10 games. That is two starts and it's valid based on the first instance, the talking to he got from MLB after that first instance and the blatant application of the tar this time. Pineda was either throwing caution to the wind or being amazingly dumb. Either way, he needs to learn a lesson.

It also puts the Yanks in a hole. Losing Pineda that early forced them to use their pen early. And that will have an impact tonight. If Sabathia doesn't come out strong, they're in trouble.

But let's also put this in perspective. Pineda wasn't doctoring the ball, like Don Sutton with his sandpaper or Joe Niekro with his nail file. Pine tar is all about grip.

Nevertheless, it is still cheating and still illegal. Perhaps if he wasn't as blatant about it this wouldn't have happened. But he was and it did.

A good win for Boston, though. And now we can all look forward to every Sox-Yanks game going 5+ hours as every pitcher is checked for illegal substances on the mound.