Not much changed for Boston after their four games at Fenway with the Orioles. They started out two games back from first and ended it 2.5 games back. They are in last but at this stage that (dis)honor means little. It's all about the GB right now and the only two teams in the AL that look like they could start playing golf in June are the Mariners and Astros.

That said, it is frustrating because the Sox could be at 10-10 right now if not for one bad inning from Clay Buchholz. The Sox played an all-around better game on Patriots Day but when your starting pitcher gives up six runs in one inning...you are making your team climb a tall hill from that point on. The fact that Boston almost won yesterday's game says something about how, finally, their hitting seems to be coming around a little bit.

The Sox outhit Baltimore in two of the four games, something they have had trouble doing this year. They hit .243 with runners in scoring position over the four games, much better than the .185 they averaged against Chicago. They left 30 men on base over the series, an average of 7.5 a game, compared with 9.3 a game with Chicago. They have gone from 24th in team OPS to 21st, 20th in runs (from 22nd) and 23rd in extra-base hits (from 26th). That still isn't great. Heck, it isn't even good. But it is an improvement and that is what has to happen for Boston to start moving up the standings. Every journey starts with a single step, right?

And let's hear it for Brock Holt, who actually stabilized third base and brought a functioning bat into the lineup. His OPS right now is 1.009. Yes, that is only over four games. But when you consider Ryan Roberts had just a .333 OPS over eight games (and .200 after four), I say we give a round of applause to Brock and encourage him to keep his bat moving. 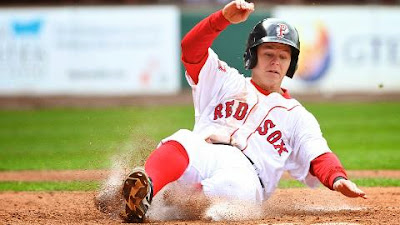 Hallelujah, someone who can play third and hit


So for all that, it was a letdown to then see the pitching slip. We had Buchholz implode the other day. Someone on Boston.com said that Buchholz isn't an ace, but a wild card. And I think that is the perfect description for him. You never quite know what Clay is going to give you when he takes the mound. He has all the talent in the world. But some days you get a crap-bomb like yesterday and others you get a work of art like that game in April 2013 against the Rays when Clay went eight innings and struck out 11. The inconsistency is maddening.

And while Doubront led the Sox to a 4-2 win with a solid outing, that followed Lackey giving his worst outing of the year. He allowed six runs on 10 hits in just 5.1 innings of work. And while Boston won the next night 6-5, Jake Peavy put Boston in the position to have to make that comeback with a similar line (five runs on 10 hits in 5.2 innings). The only constant on the mound (thus far) has been Boston's bullpen. They continue to pitch well overall and keep Boston in a lot of games. Now that the bats look to be slowly coming back around, the pitching staff has to reach down and keep pitching like they have to start the season.

But the overall picture for Boston has changed very little. But that isn't likely to continue. They have New York in town for three games. The Yankees are surprisingly in first place at 11-8. It goes without saying that the Sox cannot afford to get swept and stand 5.5 games back of New York by the weekend. They have to at least take two of three. That won't be easy as they get to face New York's two best pitchers right now, Tanaka and Pineda.

Lester goes up against Tanaka tonight, so it should be a real pitcher's duel. I have to admit that, so far, Tanaka has pitched very well. Boston's strategy of working counts won't work well against Tanaka. He comes from the Japanese majors so high pitch counts don't faze him. And his control has been very impressive, so waiting on balls isn't going to work either. Boston will have to be defensive at the plate, fouling off pitches and getting him to throw strikes every time. Then Boston's hitters will just have to get those strikes into play. If Boston can win tonight, they have a good chance of getting those two wins and gaining a little ground on the Yanks.
Posted by Dave at 4:37 PM