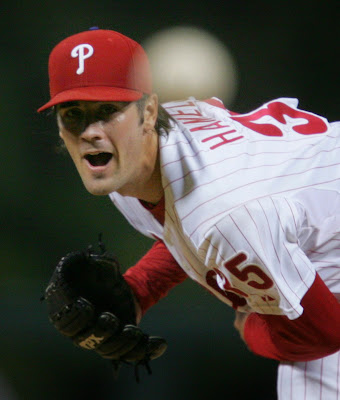 So the rumors and buzz still persist about the Red Sox being interested in Philadelphia's Cole Hamels. USA Today baseball scribe Bob Nightengale tweeted out that the Phillies want Boston catching prospect Blake Swihart in any deal for Cole Hamels. And that Boston refuses to do so.

The Phillies want Swihart for good reasons. They need a catcher and Swihart is the highest-ranked catching prospect in the minors. He was dominant in AA Portland and acquitted himself quite well in Pawtucket over 18 games last year. At 22, he could easily be the starting catcher for any team over the next 10-12 years.

Cole Hamels is presumed to be one of the better pitchers in the game today. He is an innings-eater and doesn't give up a ton of runs. Of the free-agent pitchers left on the market, he is at the top.

So, the question is two-fold. One, do the Sox need Hamels? Two, if they do, should they include Swihart?

And here is pitcher B over that same stretch

That is former Sox starter Jon Lester. The numbers are similar, but Hamels' are a little better. But there is a big caveat here, which is Hamels has pitched in the NL and Lester in the AL. So what happens if we "Neutralize" the stats? You can get into the minutiae if you'd like but this essentially tries to put stats for players on a even level so you get a better comparison between players and/or teams.

So while Hamels' stats get a little worse while Lester's ERA gets a little better, overall Hamels gives the Sox a little more than Lester did over the same period. Hamels is also slightly cheaper than Lester would have been over the next four years, with Hamels due $90M over those four years.

But Hamels isn't that much better. And he isn't that much cheaper. And it would be weird, to me, for the Sox to balk at paying Lester $25M in 2016 and 2017 but to be absolutely fine with giving Hamels $23.5M each of those same two years.

So in trading for Hamels, if it happens, is that an acknowledgment that the Sox screwed up the Lester situation? Or an unawareness of Hamels' quality as compared to Lester?

Leave that unanswered for now. So, if the Sox do decide they need Hamels, should they trade Swihart as part of the deal? 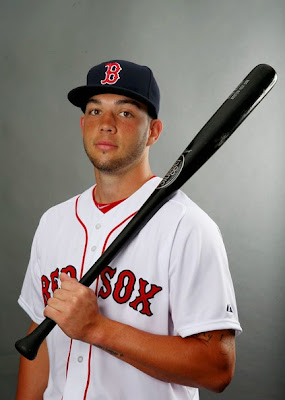 That is a tough one. As the top catching prospect in the minors, one who has displayed elite skills and a solid bat, you would be loathe to part with Swihart unless the player you were trading for was worth giving that up.

On the other side of the equation, the Sox already have a young catcher in Boston. Christian Vázquez has displayed elite defensive skills behind the plate. For example, he threw out 52% of all base stealers last year, a rate almost double the league average. Although his bat isn't quite at the same level, one would hope that improves.

In short, this means that Swihart is "blocked". And if he can't catch, and he is too good to stay in the minors, then why not cash him in when his value is highest?

That's logical. But when I hear that I think of two words: Jeff. Bagwell.

Bagwell was "blocked" from playing at first or third in Boston. So the Sox dealt him in one of the worst trades of all time to the Astros for Larry Andersen. I think we all know how that played out.

Now, Hamels is no Andersen. And we don't know if Swihart can be a player at the level of Bagwell. But I cringe when I think of top prospects being dealt because they are "blocked". If they are good enough to play, then get the person in front of them out of the way.

So where do I end up on this?

Swihart will start in Pawtucket this year. That will give him a full season to run a staff and the Sox a really good look at what he can do at AAA. To trade him away before that can be done...I would hesitate to do such a thing.

Yes, you do run the risk that Swihart bombs and kills his value. And then you have much less to work with when it comes to trades. But he has given no indication of that happening so far.

And when you look at Hamels and Lester...the difference isn't that great. And if the Sox were comfortable enough to move on without Lester, dealing away the top catching prospect for Slightly Better Lester makes no sense to me.

I wouldn't do the deal strictly because of the prospect involved. If the Sox could move some other pieces around and get Hamels that would be worth looking at. But if this went ahead, to me, it would become another historically bad trade by the Sox.

The Sox should keep Swihart in Pawtucket and let him run for the year. Call him up in September. And if he is the real deal, make him the 1A catcher in Boston behind Vasquez in 2016. And if Swihart is the player everyone thinks he is, Vasquez is the one who should be moved on.
Posted by Dave at 10:25 AM