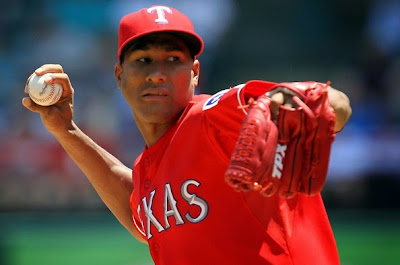 The Red Sox seem to be timing all their signings these days with impending snow storms in New England. As residents were looking towards the latest weather reports with a weary resignation, Boston quietly signed Texas reliever Alexi Ogando to a one-year, $1.5M deal.

Ogando has dealt with right shoulder and elbow issues over the past few seasons. He made just 27 appearances and posted a 6.84 ERA for Texas last season because of elbow inflammation, and he endured shoulder and biceps issues in 2013.

So which Ogando shows up in Boston? He is still just 31, so the odds are decent he can regain his form unless his elbow and shoulder are a lot worse than anyone realizes. But even then, the Sox are only on the hook for $1.5M. If it is a mistake, it's a correctable mistake.

With Ogando a part of the 40-man roster, the Sox DFA'ed Drake Britton. Britton was drafted by the Sox in 2007 and was never likely to be a long-term part of Boston's future plans in Fenway. Having watched him in Portland a couple of times, his biggest problem was his inconsistency. That and in Pawtucket last year his K/BB ratio 0.97, which is abysmal.

The Sox bullpen continues to take shape and it is looking like it will be quite solid provided these pickups revert to their norm. And that is the key part here. The Sox aren't hoping they'll keep performing above their average, but their average. If Ogando and Ross and half of Boston's pen just pitch as we already know they can pitch, 2015 will be a good year for Boston.
Posted by Dave at 2:09 PM