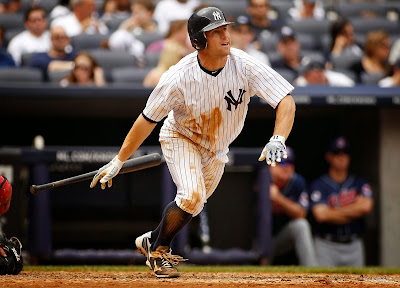 In the last installment we saw that Brian Cashman can occasionally make a smart signing or two. In looking at left field, we'll see that he used to be good at drafting players as well. Meanwhile, Boston is paying big money for some desperately needed production.

Let's look at the players:

Brett Gardner has been a steady, un-heralded presence in New York's outfield. Did you know that in 2010 he had a WAR of 7.3? If you aren't familiar with the scale, anything 8.0 or higher is considered MVP-level performance. And while he hasn't hit that height since, he has hit 4.0 WAR the past two seasons.

Ramirez comes into Boston with a lot of hype. Former Rookie of the Year, three-time All-Star. Swings a solid bat.

Ramirez also has a lot of questions. Injury-prone. Notoriously difficult to get along with. Has never played left field.

That last one is the big question facing Boston going into 2015. Even if Ramirez is solid with his bat (and there is no reason to think he won't be), how good will his glove be in left? He wasn't that good defensively at shortstop and that was his normal position. If he provides, say, 5.0 WAR with his bat but has -1.3 WAR with his glove (something Ramirez did in 2010) then you have a good player, but not one worth almost $20M a year.

And that has to be mentioned here as well. Gardner provides substantially more value to the Yankees per WAR than Ramirez in Boston. Gardner is about 1/3 cheaper. And that gap could widen even more starting in 2016 when Ramirez will get $22,750,000 a year until 2019. That is a huge chunk of change for a player who may be mediocre at best in left field.

If there is one thing to be said in Boston's defense it is that those three wins Ramirez is providing mean a lot more to them than Gardner's 2.8. Boston is projected to make the post-season; New York is not. Three wins could mean avoiding the wild-card slot. Three wins could mean home-field advantage. And $6.5M per win isn't completely insane as a valuation.

But what this does show - again - is that you don't need to spend tons of money to find a useful player that gives you production that is comparable to a more well-known player. Ramirez may have a higher ceiling on his possible 2015 impact...but he has a lower floor as well. Risk is a part of any business, true. But $20-$22M a year is a lot of risk.
Posted by Dave at 11:51 AM