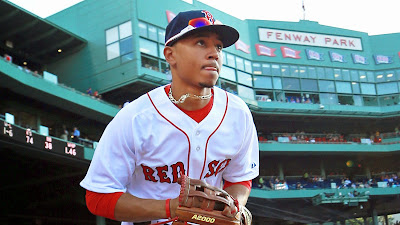 In the last installment we saw that one way to maximize value when it comes to players is to sign (or trade for) lesser-known players that give you a similar amount of production. Today we look at another way to maximize value: draft smartly and be willing to cut loose expensive players. When it comes to center field, Boston did both of those things with today's players.

134 games for Ellsbury may sound high to some, but he has averaged 129 game a season over the last four years. And 2014 marked the first time since 2008-09 where he played 130+ games in two consecutive seasons. And for being paid as much as he is, Ellsbury provides pretty decent value, especially for a large-market team.

But Betts is just an all-around better value. He provides almost the same amount of WAR at a fraction of the cost. One WAR from Betts costs less than 3% of one WAR from Ellsbury. Boston controls Betts for years to come and, at only 22, he could be a fixture in center field for the next decade. Based on current performance, Betts is a potential Rookie of the Year candidate.

Of course, a lot of the same things were said about Jackie Bradley, Jr. last year before his season went all pear-shaped. But Betts seems to be performing better and more consistently, so hopefully for Boston there won't be a repeat of 2014.

Both players also rank in the top 10 projections for center fielders (Ellsbury is 6, Betts tied at 7). So neither team is deficient at center. But it is fair to say that Boston parted ways with Ellsbury at the right time. They now have what should be a comparable player for much less money. Money that can be used to sign or extend other players on the team.

That kind of financial flexibility is one of the greatest assets a team can possess. Mookie Betts gives Boston a lot of flexibility. And possibly a ROY season to go with it.
Posted by Dave at 8:47 AM