Sound and Fury, Signifying Nothing 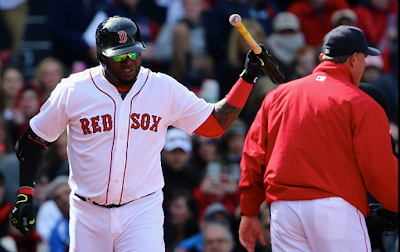 Rule 9.02(a) Comment: Players leaving their position in the field or on base, or managers or coaches leaving the bench or coaches box, to argue on BALLS AND STRIKES will not be permitted. They should be warned if they start for the plate to protest the call. If they continue, they will be ejected from the game.

David Ortiz is one of the most beloved players in Red Sox history. I would guess he is the favorite player of most Boston fans under the age of 13. He was a key reason the Sox won the 2004 World Series. He is, by all accounts, generous and kind with the fans. His numbers, when he retires, will be on-the-cusp or slightly above Hall of Fame levels*. David Ortiz is one of the all-time Boston greats.

He also has a problem keeping his mouth shut.

The rule comment highlighted at the start of this is key. Because everyone in baseball, and most fans, know that arguing balls and strikes will get you ejected. You simply cannot do it. You can ask a question about balls and strikes ("Is that where you are calling it today?"). Players do that all the time.

But you cannot drop your bat and start yelling at an umpire. You will get ejected every single time. Just like Ortiz did in Sunday's game. It was stupid to do, but it happens.

And then Jim Palmer chimes in and this whole thing goes way further than it had to.

Let's be fair about something off the top; Palmer knows baseball. Three-time Cy Young winner and Hall of Famer. From 1975-77 he had one of the most dominant three-year periods in pitching of any starter. And he is right that arguing balls and strikes in a close game isn't smart to do.

But for Palmer to get on his high-horse about arguing balls and strikes is ridiculous considering his manager was Earl Weaver. Weaver turned arguing with umpires about balls and strikes or anything else into an art form. And I don't remember Palmer ever running down Weaver for doing so. For him to now turn around and act offended that Ortiz is doing so...spare me, brother.

That said...Ortiz should have let it go. So Jim Palmer is running his mouth on Twitter? Who cares? Let it go.

But no, he has to respond and turn a little something into a big issue. It's another own goal, like his disastrous article on Jeter's website that drudged up the testing in 2003.

As the saying goes: "Silence is golden". Ortiz would do well to remember that.

Do your talking with the bat, Big Papi. And leave it at that.

*The 2003 drug test...let's be clear on two things. One, Ortiz did test positive. Two, we don't know what for and from what. The 2003 test is remarkably murky in regards to what people tested for. Only A-Rod's drugs were definitively made public. And it should also be noted that there were no penalties for that test. So in a strict legal sense, Ortiz didn't break the rules. Nevertheless, that is going to follow Ortiz and it will be interesting to see what HOF voters are thinking when Ortiz's name comes up.
Posted by Dave at 9:21 AM