A Lack of Consistency 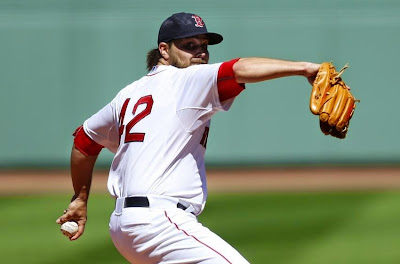 We are now three series through the 2015 season. The Red Sox sit atop the AL East at 6-3. They have taken two wins in each series, including 2-of-3 from the Yankees in the Bronx. They have scored 56 runs, tied for the most in baseball with the Oakland Athletics.

And that's all good. Especially the runs; Boston was a black hole of run production in 2014 and their decision to invest in hitting seems to be paying off so far in that area.

The pitching, however, doesn't seem to be all there. Now, it is still a little early to start making grand proclamations about Boston's starting pitching in 2015 before the entire rotation has even made two starts. Being like Dan Shaughnessy and calling Clay Buchholz "borderline disgraceful" is a little premature.*

The truth is that every starter but one over the first nine games had one decent/good start and one poor/bad start. The only exception is Joe Kelly, and we'll see if he can break that trend tomorrow night. The one consistent thing about Boston's rotation thus far has been the inconsistency in their performance.**

That's a frustrating thing to have to accept as a fan. Farrell saying he had five "number ones" in Spring Training was laughable on it's face when he said it. It looks even sillier now, if not slightly delusional.

What he, and the Sox, have are five talented starting pitchers who have never been able to put together two dominating seasons. Not one of the five have won 15+ games in two consecutive seasons. Only Buchholz and Porcello have one season with 15+ wins, and Clay's was back in 2010.

Boston's rotation is thick with potential. But, as we all know, potential doesn't mean a thing if it isn't realized.

Which brings me back to the runs that Boston has scored. As I said, their 56 runs are tied for the most in the majors. But they have also given up 50 runs. Only Texas has given up more runs. Boston's differential of +6 runs is the worst of any division-leading team not named the Cubs.

Their starters' collective ERA? 29th of 30 teams. The 34 earned runs they have allowed is second-worst behind Seattle. Their K/BB ratio of 2.50 is middle-of-the-pack.

It's a rotation whose identity is that they really don't have one at all. One day they are good, the next day they aren't. Predicting how one will pitch based on their last outing is looking like it will be something of a fool's errand.

Hopefully one of the starters will step up and become an anchor, a model of consistency the rest of the staff can look to and build around. But until that happens, we are likely going to be in for something of a bumpy ride this year.

*I personally feel Shaughnessy has been negative towards the Sox in general since they ruined his cottage industry of printing books about the "Curse of the Bambino" back in 2004. That was solid money back in the day for ol' Dan.

**I almost don't want to include Porcello. But for one bad pitch in his first start, he'd likely be 2-0 right now. If anyone is going to step up in the rotation this year, it's most likely going to be Porcello. Maybe Joe Kelly (if he can stay healthy).
Posted by Dave at 8:12 AM