A Lot Can Change in Three Days 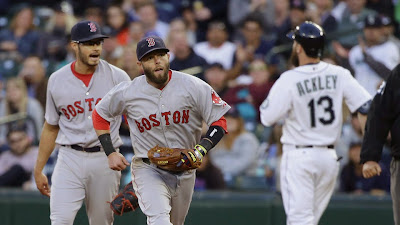 In the last three days, the Sox have won two of three while the Yankees dropped three straight to the Rays. Boston's first win was thanks to a gritty, surprisingly decent performance from Wade Miley. New York's first loss was due in part to a surprisingly poor appearance from Dellin Betances, who allowed two inherited runners to score.

Yes, a lot can change in three days.

Boston won again last night with another gritty outing, this time courtesy of Joe Kelly. And while it would be a stretch to say he pitched well (more walks than strikeouts is never a good thing) it would be fair to say he pitched well enough. One run on five hits over 6.1 innings gave Kelly just his second quality start of the 2015 season. That was enough to keep the Sox in the game. Matt Barnes worked around two hits in the eighth and, thanks to some quality at-bats from the Sox in the top of the ninth, got his second win of the young season. Uehara worked a perfect ninth for his eighth save of the season.

Wade Miley's win on Wednesday afternoon was, in many ways, even more surprising. It was his first win since April 21. And although he had the same walk/strikeout problem that Kelly had yesterday, he was able to keep the A's off-balance while Boston's hitters were able to scratch Sonny Grey just enough for the 2-0 win.

In watching that game, I can see where Miley can be an effective pitcher. Miley works fast, to the point that the cameramen sometimes seemed to hurriedly cut back to the game. When Miley is pitching poorly that speed can be a detriment, because it reinforces bad habits. But if he is pitching well, then it keeps the batters from getting settled. They have no time to guess at what Miley may be throwing.

More than once the Oakland batters got their bats on a pitch and hit it well...but to fielders directly or near enough for the fielder to make the play. And that, in part, comes from being hurried a bit and not settling in properly. Miley is only 2-4, but he has gone 6 innings or more in his last three outings. That is something Boston must get from Miley going forward.

Meanwhile, the shine has come off of the Yankees' start somewhat. Losing three in a row to the Rays is hardly what New York was looking to accomplish.

The first loss by a score of 4-2 was the most painful because it showed that Dellin Betances is, in fact, human.

Entering the eighth inning of a 2-2 game, Betances inherited runners on third and first. The first batter hit a sac fly to get the runner on third across. So now it is 3-2 Rays. Then the runner at first steals second. The batter is then intentionally walked. At which point Betances uncorks two wild pitches in the next at-bat, which gets the Rays' fourth run across the plate. And at that point, the game is pretty much over.

Girardi chalked it up to Betances being too tired. But that isn't really true in my eyes. Betances has been working a back-to-back/day-off schedule since late April. In fact, Betances got another day of rest before this appearance he normally wouldn't have had. Betances just had a bad outing.

That's normal...but his relative excellence to that point is something the Yankees have been relying on to win games.

The other two losses were more a function of the lack of depth that the Yankees have in their rotation. Adam Warren is not your ideal starter And while Chase Whitley can have good games (his outing in a 3-1 loss to Toronto in early May was impressive), it doesn't matter because he hurt his elbow in the second inning and had to leave the game. And the likely replacement for Whitley is Chris Capuano. The Red Sox jettisoned him last year because he wasn't good enough for them in one of their worst seasons in recent memory. So you do the math about how this is likely to go for New York.

But Yankee fans shouldn't be too nervous yet, nor should Boston fans start relaxing. Three games is a very, very small sample size.

But within that sample, you can see a way forward for the Sox. And backwards for the Yankees.
Posted by Dave at 9:43 AM