I Was Wrong...NOW the Red Sox Have Hit Their Low Point 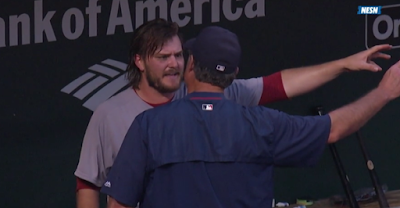 At least until tonight. Because if the Sox have excelled at anything this year, it's finding new and exciting ways to disappoint their fans.

I have been saying since late April that Boston had a limited window to get their act together. That they needed to get firing on all cylinders because relying on the mediocrity of the rest of the AL East had a limited shelf life. Well, that window closed last night.

After losing 6-5 to Baltimore and getting swept by the Orioles, the Red Sox are seven games out of first. They have a run differential of -48 and show zero signs of getting their act together.

When they pitch well, they can't score runs. And when they score runs, they can't pitch well. The result this time is losing three to Baltimore and undoing all the good work they did before leaving on this road trip.

And this time, we had the added benefit of Wade Miley and John Farrell jaw-jacking at one another after Miley was pulled in the fifth.

I don't know which was more surprising; Miley having the audacity to argue about anything after stinking on the mound or Farrell seeming to just sit back and take it for the most part. This wasn't a situation where Miley had pitched great and didn't want the ball taken out of his hands. Miley looked horrible out there. Farrell was doing him a favor.

My hope is that post-game Farrell ripped the unholy Hell out of Miley for that outburst. Because if he didn't, then Farrell is going to lose whatever control he has in the locker room. When a team is losing, the last thing it needs is a passive manager that doesn't hold players accountable for their bullshit.

Because right now, this season has 2012 written ALL over it. Except with even more un-movable contracts.
Posted by Dave at 8:24 AM