Thoughts on the Sox and Yanks 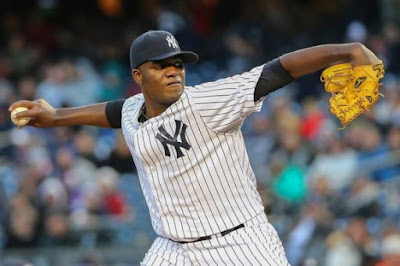 I've decided I have no idea on what to make about Boston's rotation at this point.

I looked at Porcello in mid-May. He was 4-2 and had thrown four straight quality starts. I thought - and said - that he had turned a corner.

Well, he sure did. He just went in the wrong direction. He has since lost six straight starts and given up four or more runs in five of them. For the month of June he is 0-4 with a 6.20 ERA. Ugh.

Wade Miley looked cooked after giving up five earned runs against the Rangers at the end of May. But, aside from his debacle in Baltimore, he has won three of four starts in June. His ERA is a respectable 3.42 for the month of June and he currently has a winning record for the first time this year (7-6).

The cold, simple, truth is that there is no consistency to this rotation. Trying to guess what a pitcher will do from one start to the next is almost impossible. You'd have as much luck reading tea leaves or chicken bones as you would using statistics to determine what will happen over the next couple of months. Did you know Clay Buchholz hasn't given up more than four earned runs in a game since May 4th and has a 2.81 ERA for the month of June? I didn't, and it may not even matter since he could easily go out and stink it up for the next three or four games.

Consistency matters and right now Boston doesn't have it on the mound.

Batting, however, is a place where Boston may actually be finding their footing.

All year, Dustin Pedroia and Xander Bogaerts have produced for Boston despite what talk-radio may tell you. Bogaerts in particular; he has the best WAR for a shortstop in the AL as of this morning. The negativity sent his way on the radio baffles me, to be honest.

But now Mookie Betts is stepping up as well. His June splits are phenomenal (.375 BA / .412 OBP / 1.068 OPS). His monthly totals have improved each month, which is an encouraging sign as well. His 2.8 WAR is fourth for center fielders in the AL.

Betts is demonstrating growth at the plate, which is a good sign that his career arc at this point in his development is extremely positive. Many first and second-year players have a lot of trouble hitting in the majors but Betts is working through it.

Having a legit third producer in the lineup makes Boston's hitting better all-around. Add to it Brock Holt hitting the cover off the ball* and we may see a resurgence in Boston's production.

That hasn't been a problem in New York, where the Yankees continue to exceed pre-season expectations. And they got to celebrate A-Rod's 3,000th hit as well.

Rodriguez has had a Hall of Fame level career, something that his 3,000th hit made quite clear. But, like Clemens and Bonds, the specter of his use of PEDs may well keep him from ever entering Cooperstown. Especially since the rumors of his use have followed him since early in his career, unlike Bonds and Clemens.

It's a tragedy because, like the other two, his talent is so immense and obvious that he would have likely had a HOF career without the PEDs.

But for now, in 2015, he is producing. He, along with Brett Gardner and Mark Texeira, are the three New York batters with WARs of 2.0 or better. Add in the reanimated corpse of Brian McCann and you have the engine of a lineup that has kept New York in or near first place in the AL East for most of the season.

Michael Pineda continues to impress as the unarguably best pitcher in New York's rotation. Even though June has been his rockiest month to date (2-1, 4.24 ERA) he always gives New York the chance to win. This is the talent New York traded for back in 2012. And, if you look at Jesus Montero and Hector Noesi since the deal, it looks like New York came out ahead. Even if his WAR (1.6) doesn't match the levels of other 8-3 pitchers like Sonny Grey and Dallas Keuchel he has been impressive in 2015.

But, as always, the strength of the Yankees is their insanely talented and productive bullpen. Specifically the 1-2 punch of Betances and Miller. Fun fact: there is one reliever in the top 10 AL pitchers by WAR and his name is Dellin Betances. His WAR is 2.2, which is impressive enough for a starter. For a reliever it is insane; Betances has a higher WAR right now than Felix Hernandez.

Miller is no slouch either, sitting in the top 25 in WAR for AL pitchers. Those two right there are why New York has been able to survive having a rotation with fewer quality starts than Boston and a middling 3.95 ERA. Well, that and the second most productive lineup in the AL.

But the caveat to all this is one I have mentioned before: things even out. Boston has had some historically bad luck and production. New York has had some phenomenally good luck and production. This is really more about the Yankees and their chances for the post-season. Boston is nine games out on the edge of July, which means they'd have to play at a level they haven't reached all season long to even sniff the post-season.

New York is firing on all cylinders, but they can't afford to stumble or lose anyone for a long period of time. If Betances goes down with an injury, or Teixeira or Pineda, the Yanks are razor-thin when it comes to depth. Look at the loss of Miller. His last game was June 9. Since then the Yankees have gone 5-6. Two of those losses were one-run defeats (2-1 to Washington on 6/10 and 2-1 to Miami on 6/15).

Now, what if Teixiera goes down and Garrett Jones starts playing every day? Teixeira hasn't played more than 123 games in a season since 2012. McCann is having his best year since 2011. What if he reverts to form?

None of this is meant to disparage what New York has done. You have to be impressed with how they have defied the experts and the odds to this point in 2015. But you can do that and recognize that they are doing this with a very, very thin margin for error.

As we head into July and the halfway point of 2015 it will be interesting to see where both these teams are headed. But if the first-half is any indication, New York may want to get ready for October baseball while Boston breaks out the golf clubs.

*Brock Holt needs to be a starter for the Sox, not a sub for injured players. He has earned it with his play over the past month.
Posted by Dave at 11:19 AM