Game Review: Out of the Park Baseball 16

I took control of the Philadelphia Phillies in 2015, kicking Ruben Amaro, Jr. to the curb. The mandate from management? "Try to not suck."

By the spring of 2019, the Phillies had just finished winning back-to-back titles. Mission accomplished.

I took control of the San Diego Padres, kicking A.J. Preller to the curb. The mandate from management. "Try to not suck."

By the spring of 2022, the Padres had run off a string of five straight NL West titles and captured three World Series trophies. Mission accomplished.

Have you ever heard of the living legend Larry Townsend? He plays in the Four Counties League in Ireland for the Ennis Music. From Port Alfred Bagotville in Quebec, Canada, Townsend has won seven MVP awards in his 12-year career. The Music have brought home the championship eight times in the last 10 years.

This may be news to you since I created the Four Counties League and the Music, along with 15 other teams. I set up the rules and parameters, including how often foreign players became available through scouting, which is how L.T. came to be. 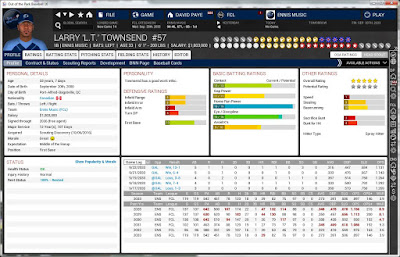 Three examples of what you can do with Out of the Park 16, the latest baseball management sim from Out of the Park Developments. This game is both deep and wide in what it brings to the table.

I am a big fan of sports management sims. To now my favorite has been Football Manager. But I think, for me, OOTP 16 surpasses it. Not only because it is a baseball sim, but because the versatility of the game allows you to indulge almost any baseball fantasy.

Want to take control of a franchise from it's inception to the modern day? You can do that. Want to do the same thing but allow for non-historical trades and signings so Babe Ruth stays on the Yankees? Or maybe have Ruth...and Ty Cobb...and Rogers Hornsby on the same team. Ladies and Gentlemen, your 1921 World Series Champion Boston Braves. 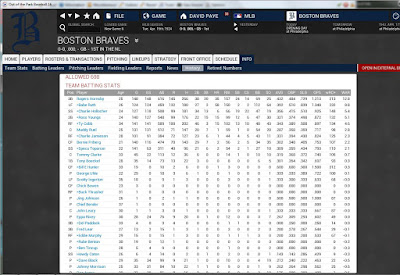 OOTP 16 allows you to indulge almost any idea you want, small or large. You can do it as the general manager, controlling the high-level decisions, drafts and trades. Or you can be the manager, handling every in-game detail from lineups to whether you want your batter to bunt or swing away.

If there is one drawback it is that the learning curve can be a little steep. They have a good online manual you can access from the program but it still takes some trial-and-error to get comfortable. I also personally had problems with keeping a historical team from moving in a historical league, or replacing them with a different team. OOTP 16 would inevitably replace my custom team with the historical franchise when it moved. But that could have been me missing the how-to on avoiding that problem.

If you do play a historical league and allow for non-historical trades and player development, you can compare the player's career in your league to their actual historical performance.

For example, in my Boston Braves game, I signed a young man in 1914 by the name of Guy Morton from Vernon, CT. In real life he played for Cleveland. He had an average career, going 99-88 over 11 seasons.

It is also customizable. I downloaded a mod that had MLB quality logos and uniforms for over 1000 potential teams. There are others that modify teams, rosters...anything you can think of. OOTP 16 allows you to alter existing ballparks or build new ones. You can fire and hire managers and staff for not only your team, but your minor league system. Jack up ticket prices, rename end-of-season award, give each player a nickname...if I listed every thing you could do to with this game I would be here for weeks.

In the end, OOTP 16 is just a lot of fun. Controlling a franchise, watching the seasons unfold, celebrating a division title and then crying as your star pitcher blows out his elbow before the World Series (it happens). You can download it for purchase directly from OOTP or on Steam. If you do download it on Steam, it will let you know how may hours you have played the game.

I love this game.

Email ThisBlogThis!Share to TwitterShare to FacebookShare to Pinterest
Labels: Baseball, OOTP, Out of the Park, Review, sports, Video Games