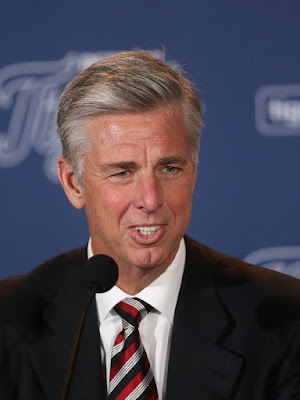 Here's the thing; everything is on the table. Dombrowski has no allegiance to any of these players. He didn't draft them or watch them come up through the ranks. He didn't trade for any of them. And that means that some players Red Sox fans consider untouchable may not actually be so.

That said, there is a core of young talent here that Dombrowski wouldn't trade unless a mind-blowing deal came along. Eduardo Rodriguez, Bogaerts, Betts and possibly Bradley are on that list. Brock Holt keeps proving he belongs here. Travis Shaw has done nothing to deny him a chance to be the every-day first baseman. There is talent on this team, the kind of talent you can build on to make a competitive squad.

There are also the under-performing pieces of Porcello, Sandoval and Ramirez. Those three signings - and their sub-par performances - are what likely did Cherington in. They are also expensive under-performing pieces. Which means that Boston is likely stuck with them unless Dombrowski can find a sucker to take them in deals without having to eat too much salary. My guess is that won't happen so Boston is going to have to work around these players being on their roster.

Then there are the veterans that you could trade and possibly get something worthwhile in return. The problem for Boston is that those two players are named "Ortiz" and "Pedroia". Both also have no-trade rights. And are insanely popular in Boston.

So that is a challenge for Dombrowski. The veterans he could trade for actual value he can't trade. And most of veterans he can trade are overpaid and playing like hot garbage.

The only real pieces he could trade and possibly get value for are Clay Buchholz (if Boston activates his $13M option for 2016) and Junichi Tazawa. The problem there is that Buchholz - even with his uneven performance - is your most talented pitcher and Tazawa has pretty much been the only bright spot in an over-worked bullpen. Of the two, I think Buchholz is more likely to go. If Henry Owens continues to pitch well and the Sox sign a good free-agent arm (hi there Jordan Zimmermann!) then Buchholz becomes expendable.

Dombrowski could also try to move some prospects for established players. If there is one area that Cherington excelled in it was building Boston's farm system. Ben may have been a lousy evaluator of major-league players but he knew how to bring in solid prospects.

Dombrowski has no connection to these prospects, which would make it easier for him to contemplate trading them if needed. The one that stands out to me is Manuel Margot. Whom I like a lot. But with Betts, Castillo and Bradley in Boston, he is a young talented outfielder that Dombrowski could use as a major piece of any deal.

2015 has been a bust. And Boston's ownership has taken steps to try and ensure that doesn't happen again in 2016. For that, Boston's fanbase should be grateful. But Dombrowski has his work cut out for him. Even with the young talent on the team, the poor play and over-sized salaries of many veteran players will make a winning record, let alone a playoff spot, a challenge to achieve in 2016.
Posted by Dave at 10:26 AM