McCann deal should remind Sox to keep clear of Kemp

But this deal is instructive for Boston. Because it points out the danger in paying for past performance. From 2006-2010, McCann was one of the better catchers in baseball. Averaged a 3.5 WAR, had an OPS of .856 and was decent on defense.

And that brings us to Boston and the Dodgers' Matt Kemp. With Jacoby Ellsbury still likely to go, the Sox have to fill in a gap in the outfield. I think the best plan is to bring Jackie Bradley, Jr. into center field. He has a better glove than Ellsbury but a weaker bat. Slot him in at the 9-spot in the batting order and see if he can make the position his own.

But Ben Cherington is going to do his due diligence and that means looking at potential people to bring in. And Kemp is one of those guys. He is owed $126M over the next six years. And with a surfeit of outfielders (and a bloated payroll), the Dodgers would likely be willing to move him. 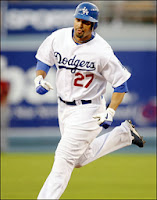 The problem here is two-fold. First is that the Sox would have to likely give up at least one top talent in their farm system. Which would be ridiculous. So let's take that out of the equation and pretend this is a straight free-agent signing with the existing money as the deal. So the second problem is this: Is Matt Kemp really worth six years and $126M at this point in his career?

Well, from 2008-2011 he would have been. Here are the averages for Kemp over that four year stretch:

His comparable age-wise during his mid-20s? Carlos Beltran, one of the more dominant young outfielders in his day.

And here are Kemp's averages over the last two seasons:

It's night and day. Kemp has struggled with injuries the past two years and they are taking their toll. A busted hamstring in 2012. A torn labrum surgically repaired that offseason. And his bum ankle that shut him down last year.

If Cherington and the Sox were to trade for Kemp, even if Los Angeles ate some of that money, it would be a horrendous trade. The Sox would still be likely paying $10M or more a year for a player who has been debilitated by injuries. And would have given Los Angeles at least one good prospect for the privilege of doing so.

The Yankees just demonstrated what happens when you let a combination of panic and past performance drive your off-season signings. Boston needs to take note of that and stay on course. Jackie Bradley, Jr. is the future for Boston at center field.