Of all the players who are on the 2014 Hall of Fame ballot, which was unveiled last week, there is no one more intriguing than Mike Mussina.

Among the players not tainted by the stain of PEDs on this ballot, there is perhaps no player who sits more firmly of the bubble between the Hall of Very Good and the Hall of Fame than Mussina.

Joining Mussina as first-timers on the ballot are Greg Maddux and Tom Glavine, who both should be locks to be elected this year, as well as Jeff Kent and Frank Thomas. Other candidates who received a high percent of votes last year are Craig Biggio (68.2 percent), Jack Morris (67.7 percent), Jeff Bagwell (59.6 percent) and Mike Piazza (57.8 percent). Also on the ballot are PED lepers Mark McGwire, Barry Bonds, Sammy Sosa, Roger Clemens and Rafael Palmeiro. 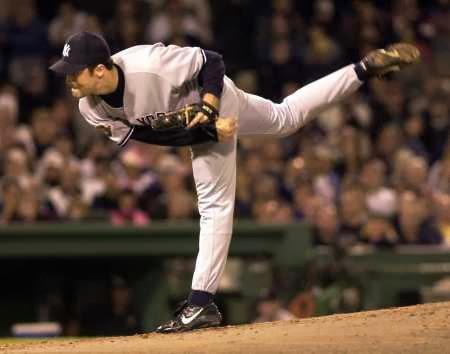 A player needs 75 percent of the vote cast by voting members of BBWAA to receive enshrinement.

Now Mussina is not a first-ballot Hall of Famer. Mussina getting on the first ballot is about as likely to happen as Fox News coming to understand that it's not really all that "Fair and Balanced."

In other words, it's not going to happen.

Fortunately for Mussina, Hall of Fame consideration is not a one-and-done proposal. Provided a player garners at least 5 percent of the vote, he remains on the ballot for 15 years.

And in Mussina's case it's going to take a little time before the voters start giving him the serious consideration he deserves. That because while he was an outstanding pitcher for the entirety of his career, Mussina was never the sexy name, never the dominant player at his position.

He never won a Cy Young, came one strike short of a perfect game, fell one inning short of winning a World Series, and won 20 games only once. He was always overshadowed by the likes of Roy Halladay, Pedro Martinez, Randy Johnson, Curt Schilling, John Smoltz, Maddux, Glavine and Clemens.

Still, Mussina put together an impressive resume over his 18-year career playing for the Baltimore Orioles and New York Yankees. He went 270-153 with a 3.68 ERA, 2,813 strikeouts, 1.19 WHIP and 82.7 WAR. He made five All-Star Games, won six Gold Gloves and finished in the top five in Cy Young voting six times, including finishing second in 1999.

Though he had only one 20-win season, he did put up two 19-win seasons, leading the American League in 1995, and three 18-win seasons. He had 11 seasons with at least 15 wins and had at least 10 wins in all but his first season of 1991, when he went 4-5 with a 2.87 ERA in 12 starts for the Baltimore Orioles. All that speaks to a remarkable level of consistent excellence that in a way can be described as Jeterian.

And he put up those numbers while spending his entire career in the AL East, which over the course of Mussina's career (1991-2008) produced eight World Series champions.

Mussina's 270 wins tied Burleigh Grimes for 33rd on the all time career wins list, and of the pitchers who have won at least 270 games, only five have a career winning percentage that matches or betters Mussina's .638 -- Grover Cleveland Alexander, Christy Matthewson, Lefty Grove, Clemens and Johnson.

About the only knocks on Mussina are his 3.68 ERA, which would be the second highest in the Hall after Red Ruffing, and his 376 homers allowed, which is nearly double the Hall's average of 189.

There are, however, a couple of things to consider when looking at the those numbers. First, Mussina pitched for teams whose home parks -- Camden Yards and Yankee Stadium -- are very hitter friendly. And second, Mussina pitched as clean player in the PED era, playing against the likes of Jason Giambi, Clemens, Manny Ramirez, Mark McGwire, Jose Canseco, Miguel Tejada and Palmeiro.

Here's the thing that often gets overlooking about the era. While there were dozens -- and possibly hundreds -- of players using chemicals to artificially inflate their production, there were hundreds of honest, clean players whose careers were being hurt, whose statistics were taking hits.

How many more wins would Mussina have had if the era was clean? Did it cost him one win a season? Half a win? Did it cost him a second or third 20-win season? How much lower would his ERA and WHIP have been? How many fewer homers would he have allowed?

The sad fact is that there is absolutely no way to quantify the impact the steroid users had on Mussina's career. But there is one undeniable truth: Had the era been clean, Mussina's already impressive career would have been even better.

And that fact should be enough for BBWAA voters to move Moose off the bubble and into the Hall of Fame.