2013 Not As Strange As It Seemed For Sox and Yankees

So in reading Aviv's piece about all the problems the Yankees have going into 2014, it was cool to see him work the old Strat-o-Matic game into the piece. I had a copy as well when I was younger. It's collecting dust in my parents' attic, next to my old Commodore 64.

Anyway, it got me to thinking. One of the things that news organizations and/or websites like to do on the verge of a new season or major sporting event is to simulate the possible outcome. The NFL did this back in September (and refused to tell who won). For the World Cup next June, the Daily Mirror in the UK has predicted yet another win for Brazil. And you can find it for just about any event.

But what about simulating something that already happened? To see if the reality of a season matches up to what the computer program thought would happen. 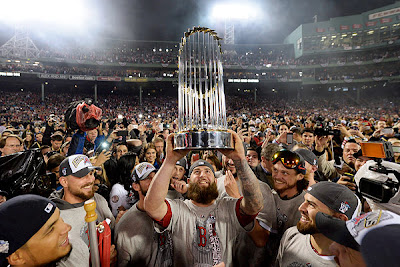 
Basically, I wanted to see if Boston's triumph and the Yankees descent to mediocrity would also play out on my computer screen. So, to that end I went online and purchased Out of the Park Baseball '14, which is about the best baseball simulator you can get on a PC. If you love stats and getting into the weeds when it comes to baseball, it's right up your alley.

I have seen predictions based on doing over 100 simulations of a season's possible outcome. I, sadly, do not have that kind of time. And if I did, I'd likely be doing something else with said time (tasting whisky in Scotland would be a much better endeavor). But I felt like doing only one simulation allowed for wild inaccuracies. So I compromised and simulated the 2013 season 10 times.

Even doing it 10 times allows for oddities to creep up and have an impact. And since it can't mirror what happened exactly in 2013 as far as injuries and trades go, the accuracy level isn't perfect. But overall, the results were pretty interesting. Here are the high-level results:

So what does this tell us? Well, nothing specific. Like I said, there are oddities in every season when you let the computer take over the entire season. For example, in the fifth simulation Boston won the World Series in part thanks to a mid-season trade where they sent Shane Victorino to the Yankees for Ivan Nova.

Take that in for a moment.

But if we deal in generalities, over the ten simulations we can see that the Red Sox were well-built. They consistently finished first and made it to the playoffs. The Yankees, on the other hand, could only make it to the post-season once. They struggled to reach .500 in each simulation. And the one time they made it to 90 wins was thanks to a monster season from Travis Hafner and Phil Hughes somehow going 13-12. 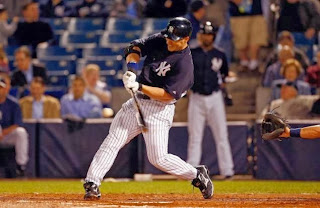 New York, I give you your best player.


In other words, the Yankees' talent was a mile wide and an inch deep. And the "mile wide" part is highly debatable. If they lost a key player like C.C. Sabathia or Robinson Cano, they tanked. The Red Sox, on the other hand, were able to sustain their level of play. In the tenth simulation, for example, the Sox lost Ellsbury and Lackey - at the same time in late June - for the rest of the season. Pedroia went down for the entire month of July. They still went 108-54 in that simulation. And that was because they had depth. Maybe their top stars weren't as transcendent as you'd find on other teams, but they could weather the ups and downs of a 162-game season. Kind of like in real life.

It was also interesting that the Red Sox made the playoffs in nine of ten simulations but only made it to the World Series twice, winning once. I think that puts their real-life win in some perspective. I have said more than once here the goal of any team should be to build a flexible, competitive squad that can make the post-season and, if they catch a couple of breaks and ride some luck, win a championship. In hindsight, the Sox making the post-season shouldn't be as surprising as we all found it. But their World Series win was something special indeed.

I also went to Baseball-reference.com to compare the averaged records of both teams to their real records and the Pythagorean winning percentage expected for each side based on their performance.

The variance between the real records and averaged records wasn't than bad overall (two win difference for Boston, four wins for New York). But the PWP numbers are very interesting. In short, Boston was slightly unlucky relative to their performance. And New York was actually very lucky indeed, winning six more games than they should have. That should encourage Boston fans and give Yankees' fans a headache.

Sometimes, reality and fantasy are equally depressing for some people.
Posted by Dave at 4:40 PM