So on an older personal website of mine I started listing whom I thought were the best five players on the Red Sox for each number. I thought it would be a nice thing to bring here during the down time before pitchers and catchers report.

Keep in mind as I make my way up the list that there were no numbers on Sox uniforms prior to 1931. So there's a whole slew of players like Babe Ruth, Tris Speaker, Cy Young and Smokey Joe Wood who aren't in this list. So no e-mails complaining about that.

The other rule is that I won't necessarily have five players listed. I'm not going to sully the list by including some hack that had the number for one year and played in six games just to have five names. I'll give all five spots to one player if I have to.

5. Bernie Carbo (1974-1978) - Bernie actually lost this number for a few months in 1976 when the Sox traded him to the Brewers for Tom Murphy and Bobby Darwin. But that December he came back to the Sox with George Scott for Cecil Cooper. And the less said about that, the better. He never put up stellar numbers, but he did have that great appearance in the 1975 World Series. For that alone, he deserves to be mentioned in this list. 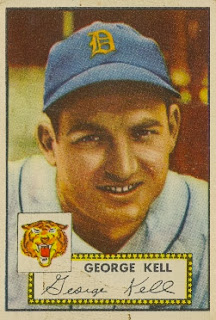 
It was a trade that really didn't do anything for either team: the Sox finished sixth that year in the AL while the Tigers were dead last.

2 and 1. Bobby Doerr (1938-44, 1946-51) - One of the all-time greats. A legend. The greatest second baseman the Sox have ever had. And he was humble enough never to say a single one of those appellations himself. "The Silent Captain" played 14 seasons for the Sox, the only team he ever played for. He was a nine-time All-Star. He finished in the top 30 for MVP voting eight times, including a third-place finish in 1946. He was named The Sporting News AL MVP and Player of the Year in 1944. He is eighth all-time for putouts at second base and 14th all-time in assists. He is currently 20th all-time in the JAWS rankings for second basemen. He was elected to the Baseball Hall of Fame by the Veteran's Committee in 1986. And if there is a classier, more decent man to play the game I've yet to see him. It's no wonder his number was retired by the Red Sox in 1988. It should've been done 37 years earlier.
Posted by Dave at 2:04 PM