A Winter Wonderland For Cherington and the Sox

Going into the winter meetings last year, Boston had numerous holes to fill. Having gotten out from paying over a quarter of a billion dollars worth of contracts (thanks to the Dodgers' largess), they had the flexibility to look around and target key players.

Over the next few weeks, they would sign a few guys named Jonny Gomes, Mike Napoli and Shane Victorino. They picked up a reliever by the name of Uehara.

I think they did pretty well last year for Boston.

This year Boston is in a much better position. Not only are they coming off a World Series championship, but they won that title in what many considered a "bridge" year. Their player contracts are well-structured, keeping them from having another Carl Crawford-esque albatross around their neck. Young players came up and contributed, making a case to be regulars going into 2014.

So Boston enters these winter meetings looking to tweak the roster rather than rework it. That allows them to deal from a position of strength; if they don't want to give away the farm to get one player, they don't have to. And they don't have to sign a pricey free agent to fill a position if the financials don't work.

Heck, they just sealed up their two biggest questions. Napoli is back for two more years, which covers first base. Then Boston signed St. Louis reliever Edward Mujica to a two-year, $9.5M deal in a move that kind of flew under the radar. At 29 years of age, his yearly average from 2009 on isn't that bad: 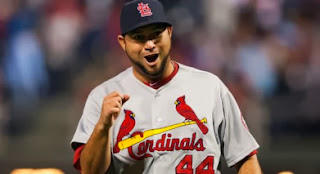 He already has the requisite beard

The remaining issues would be a little more depth on the left side of the infield and another outfielder if they feel Jackie Bradley isn't that guy. But that's it. Which brings up an interesting reversal of last year...

Could the Sox be dealers?

Where they are solid is in pitching. Of their top 40, 20 are pitching prospects. So could the Sox package a couple of mid-tier prospects for a good 1B prospect? It's possible, especially since Boston's farm system is held in high regard right now. They could also take a couple to get a mid-tier backup infielder if there wasn't a free agent that fit their budget. Pitching is everything and with the new financial realities in MLB, young arms you can lock down for a long time are at a premium.

Boston could also deal one of their existing starters. Jake Peavy, John Lackey and Ryan Dempster are all possibilities to be dealt if Boston wants to get some needed prospects at the OF and 1B positions. Especially with Brandon Workman looking like he could be the fifth starter and the trio of Henry Owens, Matt Barnes and Anthony Ranaudo looking to move up to the parent club in the next couple of years. Hell, Ranaudo could make a push this year based on his work in Pawtucket at the end of last season. It's true you can never have too much pitching, but they also tend to bring back the most in trade value.

Really, the bigger questions are more around what their younger players will do. Can Bradley be 80% of Ellsbury or more in center? Can Middlebrooks finally make the push to be a full-time 3B? Can Bogaerts continue to improve in what will be considered his rookie year in Boston? These are all questions you can't answer with trades, but with patience.

All this said, maybe someone will propose a crazy deal. Like a high-end player at third or in the outfield the Sox would be crazy to pass on. Then maybe you consider dealing a couple of high-end youngsters. But that name better be fantastic. And there aren't many players like that.

So this really shapes up as a time for Cherington and the brain trust to work on their tans more than anything else. Consider it a well-earned vacation. They certainly earned it.
Posted by Dave at 12:50 PM