And What About Cano?

So let's the this straight.

Brian Cashman and the New York Yankees have no problems giving a soon-to-be 30-year-old, injury-prone catcher whose offensive production has been in decline and has an average WAR of 1.9 over the last three years a five-year, $85 million contract with a vesting option for a sixth year. But it's Brian McCann, so it's OK to give him a bad contract.

Then on Monday the Yankees had no problems giving a 30-year-old, injury-prone outfielder whose game is based on speed and who has failed to play in even 75 games in two of the last four years a seven-year, $153 million contract, surpassing the disastrous seven-year, $142 million deal that the Red Sox gave Carl Crawford. But it's Jacoby Ellsbury, and even though he's had only one season in which he's even cracked double digit homers, it's perfectly fine to give him a contract that has nuclear meltdown written all over it.

But when it comes to Robinson Cano, the Yankees' own player who just happens to be by far the best player on the free agent market, Cashman claims to have found religion, and is holding a firm line at seven year at $25 million per year. Despite the fact that Cano has had no injury issues and has maintained his production at age 31, the Yankees have decided that it's not OK to overspend on arguably the best second baseman of this generation. It's not OK give him a contract that will turn bad in the end.

Seriously? If there is one free agent on the market who is worthy of a mega-deal, it's Cano, but all the Yankees can do is play a dangerous game with him. 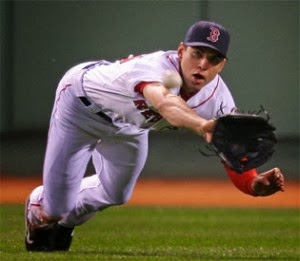 As Dave pointed out last month, Ellsbury is not a player who has demonstrated he can stay healthy and produce consistently. When healthy Ellsbury is a dynamic player -- he is a tremendous defender, hits for average, gets on base, steals and scores runs. And with the short porch at Yankee Stadium, he should see a boost in his power numbers, similar to what Johnny Damon experienced during his four-year tenure in the Bronx.

And that's the big risk here. It's always dangerous to give a long-term contract to a player who is dependent on his speed to be productive, especially when that player hits his 30s. At some point, the player is going to lose a step. That's inevitable. Then there's the ever-present risk of a serious leg injury such as a torn ACL. In either case, any loss of speed can dramatically diminish the player's production.

Clearly, the Yankees are hoping find another Damon in Ellsbury. Damon, however, got a four-year deal at age 32 from the Yanks and did not have the injury history that Ellsbury does. Damon, in fact, played a minimum of 141 games for 16 consecutive seasons. He also had a more balanced offensive game, hitting at least 10 homers in 12 of his 18 seasons. Ellsbury hit 32 homers in 2011, but has failed to hit more than nine in any other season.

So if the Yankees can find it acceptable to give a risky player in Ellsbury a seven-year deal at nearly $22 million per year, why are they so hesitant to give a player with much less risk in Cano an eight- or nine-year contract at $25 million per year?

It's not out of any sort of belief in fiscal responsibility. And it's not because of any goal to get the payroll under $189 million for this season. If Cashman and the Yanks truly were acting with any sort financial rationality, there is no way they would have shelled out those big contracts to McCann and Ellsbury. There were other players, such as A.J. Pierzynski and Jarrod Saltalamacchia, who could have been signed for more reasonable terms.

No the reason the Yankees playing hardball with Cano is because of fear and embarrassment.

Cashman and the Yankee brass are already on the wrong side of one mega-deal and don't want to repeat that mistake. After the 2007 season, they bid against themselves and gave Alex Rodriguez a 10-year $275 million deal with incentives that could have taken the deal up to $300 million.

Of course, since 2009, they've been forced to deal with A-Rod's injuries, off-field antics and PED messes, making that contract the second worst in all of sports. Sorry, but as bad as the A-Rod deal is, I don't see how it can top the 15-year, $67.5 million contract the New York Islanders gave goalie Rick DiPietro in 2006.

It's understandable that the Yanks wouldn't want to repeat that, but Cano simply is not A-Rod.

Off the field, Cano seems to be more Derek Jeter-like than A-Rod redux. Yes, Cano will go to a party, but he never says anything offensive, never gets caught in awkward situations, doesn't do stupid stuff such as kissing himself in a mirror during a photoshoot, and has never been linked to PEDs.

Simply put, even with signing McCann and Ellsbury, the Yankees can't afford to lose Cano.

And for a long time, it appeared the Bombers had the upper hand in the negotiations. Cano and his agents made a big mistake in overvaluing the second baseman worth by asking for a 10-year, $310 million deal. Few teams can afford that kind of deal, and there isn't a track record of success for teams that have given out those kinds of contracts -- the Rangers had to trade A-Rod, the Yankees can't wait to dump Rodriguez and Albert Pujols hasn't lived up to expectations with the Angels.

But with the Yankees giving out crazy deals for other teams' free agents, there was no way Cano was going to cave. He has earned the right to test the market. This is a once in a career opportunity for him. Cano will never again have the chance to land the kind of deal he will get this year. He has to go for the best deal he can get, and each and every one of us would be doing the same thing if we were in Cano's shoes.

Then Cano got exactly what he needed to land that big deal on Monday. ESPN reported that the Seattle Mariners have emerged as a serious contender for Cano, and may be willing to give the second baseman an eight-year, $200 million deal.

With another team now in serious negotiations with Cano, the Yankees no longer have the luxury of standing firm on their alleged principals. If they want to keep their best player, Cashman and the Yankees have to stop playing games and start talking in earnest with Cano. It's time to consider an eight-year deal, even an option for a ninth.

We all know that when the Yankees want a free agent, they go out get him -- even if means signing the player to a bad contract.

Now it's time to go out and get Cano -- even if mean giving him a bad contract.
Posted by Unknown at 7:00 AM