The news is that the Red Sox have signed A.J. Pierzynski to a one-year/$8.25M deal.

This, as opposed to the Yankees signing Brian McCann to a 6-year/$waytoomany contract, is a good deal.

Here is the blunt truth about Saltalamacchia: he is a serviceable catcher. His average WAR over the last three years is 1.8: that is on the cusp of the substitute/starter divide. Last year he was paid $4.5M. He wants a minimum three year deal, which the Sox don't want to do (more on why in a second). And thanks to the McCann deal, he'd likely want double what he got last year over those years. The latest rumor has Miami looking to ink Salty to a four-year deal. Now, do you think he is worth four years and $36M? Me neither. 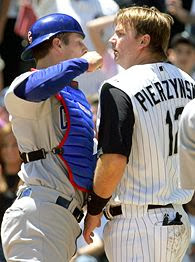 Pierzynski has averaged a 1.7 WAR over the last three years. And while Salty's bat has been better, A.J. has the better glove behind the plate. So you get essentially the same player for fewer years and less money. Not bad. But the other question is why? Why move Salty along and bring in Pierzynski for just a year.

The answer: to not block the position for up-and-coming youngsters.

The Sox have two pretty good catching prospects in Blake Swihart and Christian Vazquez. Swihart has the higher ceiling but Vazquez is closer to the majors. Vazquez spent most of 2013 in Portland with decent numbers (.376 OBP, .771 OPS) and showed some solid plate discipline (44K, 47BB). Behind the plate he did commit 10 errors but he threw out an eye-popping 47% of steal attempts (47 of 101 attempts). If he can carry those numbers into Pawtucket next season he may get the September callup and will likely be on the 2015 roster.

Swihart spent last year in Single A Salem. He played 103 games and posted decent plate numbers (.366 OBP, .794 OPS). His plate discipline isn't as good (63K, 41BB) but that is to be expected with younger players. He also excelled at killing steal attempts, shutting down 44 of 108 attempts for a 42% success rate. He should be in Portland this year so I will be keeping an eye on him.

I like this move by Ben Cherington. It's a forward-thinking, proactive move. It takes into consideration what the Sox need this year to be competitive, but doesn't hamstring the team moving forward. And while doing that it provides the opportunity for talented youngsters to slot into squad in future years. This really shows some confidence in the product coming out of the Boston farm system, and that is very encouraging.
Posted by Dave at 1:35 PM