So it's official. Jacoby Ellsbury will be wearing pinstripes. The Yankees have signed him to a seven-year, $153M deal with an eighth-year option.

It's not surprising that Ellsbury has left. The vibe that Ellsbury would be looking for the best deal has been around the past couple of years. Boras as his agent only reinforced that. And for various reasons I laid out last November, I never really expected the Sox to pay out over $20M a year to keep him in Boston. 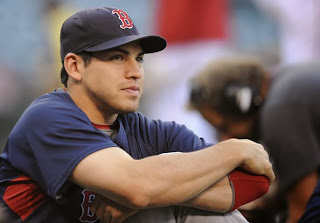 I should also point out here that I don't blame Ellsbury at all for taking this deal. He's a free agent and he wants to get the most money that he can. And if a team is crazy enough to give him over $20M a year, he should grab that deal with both hands.

What I didn't expect was for the Yankees to be the team that signed him. If only because center field isn't a particular hole they need to fill. And that signing a 30-year-old position player to that long a deal is the kind of mistake they've already made.

To make this point, here are two players and their 2013 stats:

A is, of course, Jacoby Ellsbury. B is Yankees center-fielder Brett Gardner. Ellsbury is a better player...but not by much. And he isn't $17M+ better, which is the gap between the paycheck each man gets. Essentially, the Yankees just paid out over $150M for a player they already have.

Not exactly a smart long-term play, in my opinion. But to break down the Yankees' side of this I recommend reading Aviv's piece on it. Spoilers: he's sad.

But to look at this from the Boston perspective, let's look at Players A and B again: 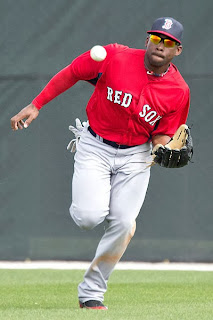 A is, again, Ellsbury. But Player B is Jackie Bradley, Jr. (pic from Matthew Lee at the Boston Globe), the (I assume) new starting center-fielder for the Red Sox. These are the 2014 Bill James projections released last month for the Red Sox.

Boston would have been stupid not to let Ellsbury move on at those numbers.

Baseball is not only about winning now - it's about being competitive year after year. That is a multi-faceted job. You have to keep your payroll down and flexible while maintaining a strong farm system. You have to extend key players while filling gaps with targeted free agents. And there are two thing you must not do. Boston has been very smart to do both of these so far in the off-season. The Yankees...not so much. The McCann and Ellsbury deals are going to haunt them sooner than later. And at the same time, they are on the verge of losing the only player they cannot afford to lose. Which, as a Boston fan, warms my heart to no end.

I'll miss Ellsbury. I was fortunate enough to watch him as he came through the farm system; he tore it up in Portland. He was lightning fast. I regret he won't break Harry Hooper's all-time steals record for Boston...maybe Jackie can take a run at it. And he was part of that wave of homegrown talent that transformed the Sox. Ellsbury, Youkilis, Pedroia, Lester, Buchholz, Papelbon...all of them have played a role in making Boston the best franchise in baseball right now.* And that shouldn't be pushed aside and forgotten simply because Ellsbury took a lot of money another team was stupid enough to offer to him.

It's a win/win deal. Ellsbury gets his money and the Sox get to see the Yankees continue their slow, downward spiral. Not too much wrong with that.