Schilling for the HOF?

This year's ballot for the 2014 Baseball Hall of Fame is going to be crowded. There are three first-timers that are all but guaranteed admittance to the Hall: If any of those three men don't make it in the first ballot, it would make a mockery of the voting process. Two 300+ win pitchers and one of the greatest hitters in recent memory.

Then there are the guys who didn't make it in last year who should make it. Craig Biggio almost made it (68.2% of the vote last year). Jeff Bagwell has to be in there; even though suspicions of PED use exist he was never caught up in any scandal and never tested positive. Other players like Mike Piazza and Tim Raines will likely make it in at some point, if not this year.

And you have the guys coming to the end of their rope. The debate about whether Jack Morris is HOF-worthy has raged for years. Well, this is it unless the veterans put him on a future ballot. Mattingly is on his 14th ballot. My guess is neither of these guys make it in.

And let's not get started on the PED Brigade of Bonds, Clemens, Sosa and McGwire.

All this noise will likely keep two more deserving players out of the Hall for at least this year. Aviv rightly noted that Mike Mussina's numbers are good enough to make it. And I think it is worth noting that Curt Schilling should also be there at some point. 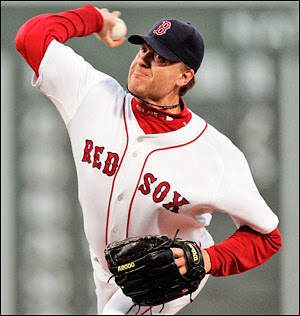 Last year Schilling received 38.8% on the ballot - a solid first year performance. And while that kind of base is no guarantee of entry (Lee Smith is still waiting on his 12th ballot), he should see that number go up.

Schilling does have a couple of things going against him. He never won a Cy Young award, despite finishing twice in the voting three times. He never had a sustained period of dominance over a number of years like Pedro did from 1997-2000, or Maddux's four straight (!) Cy Young wins from 1992-95. His 216 wins place him only 82nd on the all-time win list. And his .597 career win-loss percentage ranks him 128th all-time.

But that can be deceiving. His win percentage is still above Bob Gibson, Steve Carlton and Nolan Ryan, amongst others. Those 216 wins still put him ahead of HOFers like Bob Lemon, Sandy Koufax and Dizzy Dean.

Then there are the other numbers, courtesy of the great website baseball-reference.com. His career WAR is 80.7, 26th all-time for pitchers. Excepting Schilling and Mussina, every other pitcher with a lifetime WAR of 80 or higher is either in the Hall of Fame or is a first-ballot lock with one exception (Clemens for PEDs).

Schilling's 3,116 strikouts is 15th all-time. Every pitcher with 3,100+ strikeouts (again with the exception of Clemens) is either in the Hall of Fame or a first-ballot lock. His lifetime WHIP is 1.137 (47th all-time), better than Greg Maddux, Bob Gibson and Warren Spahn.

And this is before you get to his post-season pitching. In five post-seasons, over 12 series, this was his record:

His World Series numbers were great taken by themselves:

With a title on the line, Schilling was one of the greatest pitchers ever. That kind of post-season performance should also be taken into account.

So in the end, Schilling should be in the Hall of Fame. I don't think it will happen this year. It likely won't happen for a few. But like Mussina, Schilling is a pitcher whose numbers are deceptively solid and good enough to make it into the Hall. Hopefully in a Boston cap.

And Moose goes in an Orioles cap.
Posted by Dave at 11:58 AM

I'd have no issues if Schilling went in as a Red Sox, even though an equally strong argument can be made that he should go in as a Diamondback.

Similarly, I'd have no issue if Mussina went in as an Oriole, even though an equally strong argument can be made that he should go in as a Yankee.

Fortunately the HoF does collaborate with the player on what cap goes on the plaque to come up with a reasonable decision.

Unless they try to sell the privilege, as Mr. Boggs found out.