Barry Bonds and the Hall of Fame

Here's something about me you may not know: I have littered the blogosphere with flaming wreckage left and right. I have discarded blogs out there the way Shawn Kemp has illegitimate children. This one right here is the longest one I have ever kept at one...and we took a three-year hiatus.

I bring this up because of the Hall of Fame voting, which we will find out the results of on Wednesday. On that ballot is one Barry Lamar Bonds, who cheated his way to numerous records. So way, way, way back in 2005, when Game of Shadows came out, I considered whether or not his achievements prior to his juicing should still allow him into the Hall. So what is below is what I wrote in 2005.

It's pure insanity that it took this book to force baseball to undertake an investigation into who used steroids in baseball. But why should we be surprised? The owners and management of MLB turned a blind eye to the increasing use of PEDs, reveling in the increased home run totals and matching gate receipts. Meanwhile, the players swelled to Michelin Man proportions.

And none more than Barry Bonds

When Barry broke upon the scene in 1986, he was a recognized five-tool player. A star in the making. And he fulfilled that promise. Between 1986 and 1998, Bonds was a 8-time All-Star. A three-time MVP. Eight Gold Gloves.

But that wasn't enough. In the late 90s he saw sluggers like McGwire and Sosa capturing the eyes of America while he, the complete player, was left to the side. So he decided to do something about it. And that something was steroids and the rest.

And it was so obvious. So I compiled some numbers.

When Barry Bonds denies using PEDs, you have to look beyond his slowly expanding head. You have to look at the stats. And when you do, you see a very interesting pattern.

Here are the five best years for Barry Bonds' career in OPS, AVG and HRs:

You'll notice that in each category, all the years are post-1999 with the exception of 1993 in both AVG and HRs. 1993 is the last year Bonds won the National League MVP before his streak of four straight MVP awards began in 2001.

If you look at his career stats, the improvement after 1999 is shocking. And completely at odds with the basic way human biology works. It makes no logical sense that Bonds should improve yearly starting in his late 30s. And increasingly so. You could easily make the argument his second best year was 2004.

So his two best years in his 18-year career were when he was 38 and 40?? Only if he was juicing, because the human male doesn't age that way.

It was 1999 when he started using PEDs. That year was cut short after 102 games because of an elbow injury he blamed on the steroids. But when he adjusted his schedule for the 2000 season...well, we know what happened.

And is it that surprising that five years later, injuries cost him most of a season? Or that his head grew in size, which shouldn't happen in the normal course of events

Let's be blunt - batters don't get better as they get older. There is some statistical evidence that pitchers can maintain quality into their 40s. But not batters.

Compare Barry's increasing stats with the last full year of another great Giant, one Willie Mays.

That is what happens to the great players as they age. They don't outslug and outhit players 10-15 years younger than them. It just doesn't happen.

So when Bonds so blatantly flaunts that progression, it shouldn't take years, two books, a Congressional hearing and grand jury testimony to finally do something about it. 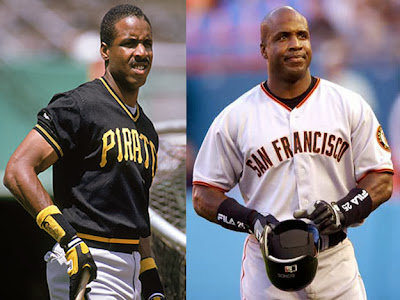 
So yeah, the guy cheated. Anything after 1998 is ridiculously suspect. But here's the thing; if someone's career prior to that is still Hall of Fame caliber, should they get in?

Like I said in that old piece, from 1986 to 1998 he won three NL MVP awards, eight Gold Gloves and went to eight All-Star games. He also had seven Silver Slugger awards. And here are his averages and totals over that period:

Take those numbers today, and here is where Bonds ranks on each one all-time:

One more thing: if you look at his JAWS numbers, that 99.6 Total WAR would be 3rd all-time for left fielders.

And we return to our original question: should a player's achievements prior to his juicing still allow him into the Hall?

I remember when I wrote the piece I quoted here I was livid over his cheating. I wanted a lifetime ban, all his records stricken from the books...I wanted him to not even exist as far as the history of baseball was concerned.

Now...it's more muddled. Everyone thought A-Rod was clean after Game of Shadows came out, now it looks like he was using for most of his career. We had a Congressional hearing that took down three potential Hall of Fame players. Manny Ramirez is out of baseball after two high-profile suspensions for using PEDs. And Ryan Braun, whose first six years in the game were amazing, turns out to be a user as well. The post-1998 period is so dirty that almost every player that hits for power and average is viewed as being compromised beyond measure regardless of if they tested positive for anything or not.

Bonds isn't the rogue player he was treated like in 2005; he was just the first big name to get caught. And there is pretty universal acceptance that he was playing clean before the 1999 season began.

And that player, that 1986 to 1998 player, had a Hall of Fame career. Especially in today's age where WAR and OPS are more important than batting average and home runs.

Should Bonds get into the Hall on the back of those 12 years? Does that trump or mitigate the later years where his numbers grew as fast as his head size? Or do those sins outweigh all else, keeping him out of Cooperstown forever?

I wouldn't say that I think Bonds deserves to be in the Hall. But I am not as militantly against it as I was almost 10 years ago. It wouldn't surprise me if more and more Hall of Fame ballot voters started voting for him.

And it wouldn't surprise me to see Bonds in the Hall some day, sins and all, because of the player he was and not the cheater he became.