The '3' was worn last year by David Ross last year. Which means it will likely be given out again someday. Nevertheless, the old '3' has a storied pedigree, including a Rookie of the Year, a player who should have been ROY, a two-time batting champion and one of the greatest players of all-time.
5. David Wells (2005) - It's weird putting an ex-Yankee in this spot. And it's kind of cheating because Wells changed his number during the season from 3 to 16. But you cannot deny that Wells had a good season for the Sox in 2005. And we need someone for the fifth slot, so just go with it.

Signed as a free agent in the off-season, Wells posted a 15-7 record in 2005. His ERA was league-average (4.45, 102 ERA+) and his WHIP was a little high (1.31). But he helped stabilize a pitching roster where Tim Wakefield was the #1 pitcher and helped Boston into the post-season. His WAR was solid (3.2) and he was second in the AL in walks per nine innings (1.027). But that was his last good year; in 2006 off-season knee surgery diminished his ability and the Sox traded him to the Padres so he could fulfill his desire to finish his career on the West Coast.

What held Dropo back from a bigger career was the wrist fracture he suffered in 1951. Unable to recapture the form he showed in 1950, he was traded to the Tigers in 1952 in the deal that sent Johnny Pesky to Detroit as well. Walt retired after the 1961 season and sadly passed away in 2010 at the age of 87. He is still recognized as one of the greatest athletes to come out of the University of Connecticut. 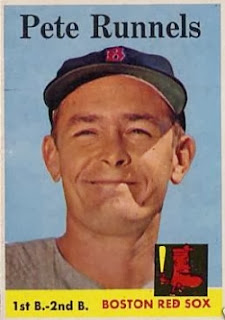 After he stopped playing following the 1964 season, he actually coached the Red Sox for the final stretch of the 1966 season. But then he was replaced by Dick Williams before the 1967 season began...and we all know what happened then. Runnels passed away in 1991 at the age of 63 following a stroke and was inducted into the Red Sox Hall of Fame in 2004.

Foxx was a monster on the field, but his ability diminished rapidly after 1940. Depending on whom you believe, it was due to either heavy drinking or a chronic sinus condition. Not many years after he retired. But he was (and remains) one of the greatest players of all-time for not only the Sox but for all of baseball. He rightfully made it into the Hall of Fame in 1951.

* He was called "Moose" because he grew up in Moosup, Connecticut.

** Fans of Pete Vuckovich would disagree with this assessment.

Quick note on Dropo: Dropo was a three-sport star at UConn, playing football and basketball, as well as baseball. In fact, when he left, he was the school's leading scorer in basketball and was a first-round pick (No. 4 overall) in the BAA in 1947 by the Providence Steamrollers.

He was also drafted by the Chicago Bears in the 9th round of the NFL Draft in 1946.