Can We Make The Jon Lester Extension Happen Already?

Every team goes into a new season with some question marks. Boston is just like every other team. As Adam Kaufman over at Boston.com points out, there are questions about Boston's offensive firepower in 2014. There is the big question about how the Sox will address the loss of Ryan Dempster before the season even begins.

But there is one question that could be resolved right away. And that is the question about keeping Jon Lester in Boston.

He's a free agent next year. He is also one of the better left-handed pitchers in the game. So why is Boston dragging their heels on extending him with a long-term deal? Especially when he wants to stay here?

"You guys have probably figured me out by now, I would hope. I usually don't say things I don't mean. So I mean it: I want to stay here," Lester said, repeating a stance he took last month. "This is all I've known. I don't like change. I don't like going into new places that I have to learn.

He has said he'd give the proverbial "home-town discount" to the sign for a long-term deal. So I cannot figure out why the hell the Sox haven't moved on this.

The only possible reasons would be his age or his performance. The first seems a non-issue; Lester just turned 30 so that is three full seasons left in the 26-32 age range considered the "prime years" for an athlete. As for his performance, his comparables at this stage in his career include pitchers like Kevin Millwood, Tim Hudson and Andy Pettitte. Unless the 2012 season is scaring off the Boston brass. And if it is, that would be idiotic.

Instead, Lester went 15-8 in 2013. His ERA was 3.75 and he had a 1.294 WHIP. Those numbers are much more in line with Lester's career from year-to-year. 2012 marked the only season since 2008 where Lester failed to win a minimum of 15 games. His WAR rose to 3.0, a respectable number. And then he turned in a fantastic post-season, highlighted by two dominating starts against the Cardinals in the World Series. In those two games, Lester went 2-0 with a 0.59 ERA, 15 strikeouts to just one walk and a WHIP of 0.652. If David Ortiz was the World Series MVP, Jon Lester was a very close second. 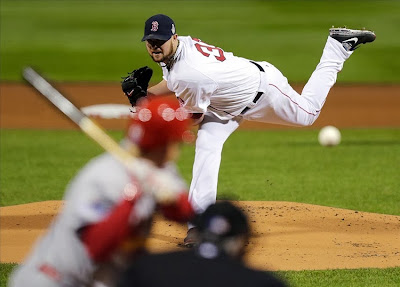 This is what a dominant post-season pitcher looks like


And then there are the other numbers. Since 2008 Lester has averaged 205 innings pitched per season. His K/BB ratio is 2.66 and his WHIP is 1.274. His average yearly WAR is 4.3. Out of 194 games Lester has started, 119 were considered quality starts (that is pitching six or more innings while allowing three or less runs). That is a 61% average. He averages over six innings per start (6.4). Batters lifetime hit only .247 against Lester and have an OPS of just .692 when he is on the mound.

Among active pitchers, Lester is in the top 30 for WHIP, WAR and ERA. He is top 20 in strikeouts per nine innings pitched and top five in win-loss percentage.

All this is a statistic-laden, roundabout way of saying that Jon Lester is a damned good pitcher and the Sox would be insane to not extend his contract. He is one of the best left-handed pitchers in the game and he is a remarkably consistent and reliable pitcher. He stays healthy; even in the disastrous 2012 season he started 33 games and pitched over 205 innings. He is a homegrown player; this is the only organization he has ever known. And while that isn't a performance statistic, it's damned nice to keep those guys around.

If he is talking about a hometown discount then we aren't talking about breaking the bank with a contract. He isn't asking for Clayton Kershaw money. He's doing just what Dustin Pedroia did; recognizing that he has made plenty of money, will make plenty more and that the dollars he doesn't take will enable the Sox to improve the team down the line.

I am sure the Sox want to keep him here. Ownership has been on the record stating they want Lester to stay in Boston for the rest of his career.

So let's just make it happen already. And have one less question on our minds as we get ready for the 2014 season.
Posted by Dave at 12:14 PM