Boston's Bats Are the Problem

At 5-8, the Red Sox find themselves on the bottom of the AL East. To be fair, that is only two games out of first. Nevertheless, that is not a place we expected to find Boston in the latter-half of April.

When this happens, the impulse is to initially look for excuses. Especially when you drop three of four to the Yankees in the Bronx.

Sometimes, that impulse is just misplaced. As with Pineda and his dirty hand; that wasn't why Boston dropped the first game.

Sometimes, that impulse has a legitimate genesis. The umpires blew two reviews that went against Boston over the weekend. And while the one on Saturday didn't affect the end of that game, the inexplicable reversal on Sunday provided the difference in New York's 3-2 win. 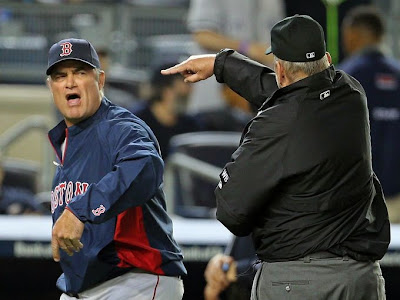 Replay doesn't help if the umpire is still blind


Replay is useless if the umpires can't actually see what is - or isn't - on the screen. Last night, they overturned a 5-4-3 double play when no conclusive angle existed to do so. That gave New York a 3-1 lead. Without that screwup, it's 2-2 going into the ninth and who knows what happens.

But I digress. Because while that call was costly, the real reason for Boston's poor standing right now has to do with their lineup.

Boston is 8th in the AL with an OPS of .695, compared to their AL-leading .795 OPS last year. They are fourth in the AL with 110 strikeouts but ninth in walks. They have grounded into 17 double plays, leading the AL.

It's not their pitching. The staff has a respectable 3.76 ERA. Their nine quality starts is second-best in the AL. They are sixth in strikeouts with 104 and their 27 walks allowed is second-best behind Detroit. While the Boston staff has allowed the third-most hits in the AL (126), that hasn't translated into a lot of runs (seventh in the AL in earned runs allowed and overall runs allowed). As a whole, the Boston rotation and bullpen haven't been spectacular, but they have been solid.

It's the bats that are letting Boston down.

Right now there are three guys who are pulling their weight. Mike Napoli has been the standout with a .906 OPS offsetting his 16 strikeouts and leading the Sox with 9 RBI and 15 hits. David Ortiz has a .755 OPS, which is quite low for him in his overall career but is second-best on the team for anyone with 40 or more at-bats. His 8 RBI are also second-best.

The pleasant surprise is Xander Bogaerts with a .703 OPS. For his first full-year that is not a bad place for him to be. His seven walks leads the Sox. He is showing good plate discipline and is getting on base.

If you expand further to batters with fewer that 40 at-bats, Grady Sizemore has been solid for Boston. His .996 OPS leads the team overall, he has four RBI and has collected 12 hits. But that is also indicative of a problem. When your part-time center fielder is your best hitter, that means you are struggling on a nightly basis.

I hate to pick on him again, but Daniel Nava is Exhibit A when it comes to Boston's problems at the plate. He is a regular starter and has an OPS of .462 which is abysmal. The best thing he did last night was draw a walk, only his third so far this year. He has only two RBI this year. Last year, 14% of runners on-base scored when Nava came to the plate. So far this year it is only four percent. If he is going to be a regular starter he has to get this figured out.

That said, an unforeseen problem has been Dustin Pedroia. He is hitting just .236 with a .527 OPS. That may be due to his wrist, which got him pulled from last night's lineup and sent back to Boston. But his OPS went down every game since April 2 until it rebounded slightly on Saturday. That's not good.

Overall, Boston's lineup simply isn't generating the production needed to go along with the solid pitching they have received. While there are random events that may be out of their control (such as last night's call) which impact a game, that is not the major factor in Boston's poor start.

Until Boston figures out their hitting problems, all the pitching in the world won't get them out of last in the AL East. It's that simple.
Posted by Dave at 11:43 AM