Boston took two games in three from the White Sox this week. And I am not exactly sure how they did it.

Across all three games, the Sox totaled just 14 hits. That includes a 14-inning marathon Wednesday night. They left 28 men on base over all three games and went 5-27 with runners in scoring position for a whopping .185 average.

And yet somehow, they won two of three games.

Truth is, they probably should have won all three games despite their continuing hitting problems. But Game One got away from them on a bad throw from Xander Bogaerts. That is his second error of the year. He's still a rookie so it is not all that surprising to see a bad throw here and there. It was just really bad timing. And it wasted a solid outing from Jake Peavy, who went six innings and only gave up one run on three hits. He has a 1.93 ERA so far in 2014 and is looking pretty solid.

Then Wednesday night we had the 14-inning spectacular that saw Boston score only three runs over the first nine innings despite nine walks, four hits, a hit batter and a wild pitch. Both teams then added a run in the 11th before Jackie Bradley uncorked a two-run double in the 14th inning to get Boston ahead for good. That was Boston's sixth hit of the entire night.

Last night was Boston's best game of the series. Despite being outhit again (Chicago had more hits in all three games) they won 2-1 on the back of a lights-out performance from Jon Lester. Eight innings of one-run ball. Seven hits, nine strikeouts and no walks. He threw 67% of his pitches for strikes and threw a first-pitch strike to 70% of the batters he faced. 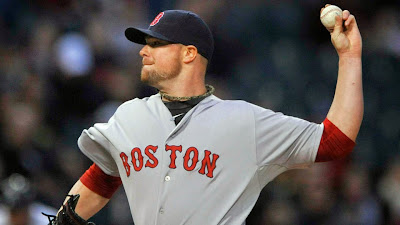 
But you can't allow yourself to look at these two wins and pretend that the Red Sox have gotten things straightened out. As I said before, their pitching is the only thing keeping them going right now.

For example, look at Chris Capuano. Here's a guy I was very skeptical about joining the team. All he's done so far is throw nine innings of relief, strikeout eight, allow no runs and earn two holds. Capuano has a 0.67 WHIP right now. And his 2.2 innings of scoreless, walk-free relief Wednesday night earned him his first win of the season. I was wrong about him. But Capuano is indicative of the overall quality of the Sox pitching staff. Sure, there have been hiccups here and there. But overall, a very solid start to 2014.

The danger here is that this pitching will mask Boston's atrocious hitting. And it is atrocious.

Overall in the majors, Boston is 22nd in runs, 24th in OPS, 26th in extra-base hits and ninth in strikeouts. The only thing keeping them afloat right now is walks; they are fourth in the majors in drawing walks. But that is a very thin, very weak thread to hang a season upon.

Every time I write here it seems like Daniel Nava is in the crosshairs. But when your OPS is .501 then that is going to happen. Having Roberts at third is no help either with his .332 OPS (I actually had to double-check that to make sure I saw it right).

The only starter producing with some regularity is still Mike Napoli, with a .900 OPS and nine RBI. He leads the Sox in every meaningful batting category. Runs, hits, RBI, OPS...it's all Napoli, all the time.

It's getting to a point where I could just write this each time. Change the numbers but the overall story is the same. Napoli hits, nobody else does it with any regularity. Hopefully the return of Shane Victorino will shake the Sox out of this malaise.

Sending Nava down to Pawtucket when that happens would also be a good idea. Something is wrong with him. This isn't a "return to form" as some sports pundits have said. Nava's career OPS coming into this year is .782, which is very solid. To be almost 300 points below that...I think going to Pawtucket to figure it out would be a very good thing for both the Sox and Nava. He is a player you want to do well; believe me, I don't like pointing out how he is hurting the team. But he can't be a starter in the lineup if Boston wants to get moving up the AL East standings.

Tonight Boston starts a very important stretch of games. The next 13 games are all against AL East teams and 10 of them are at home. And with the AL East so tight (Boston is in fourth but just three games out of first) getting wins over the next two weeks is critical.

It starts tonight at Fenway with the Sox facing Baltimore and Chris Tillman. Tillman is historically good against the Sox but in the season opener the Sox were able to get him off the mound after just five innings. They'll have to do that again if they want a chance of winning tonight.
Posted by Dave at 10:19 AM